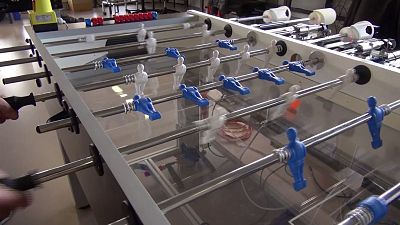 And you thought you were a table football star?

Students at the Ecole Polytechnique Fédérale de Lausanne in Switzerland have developed a robot that can beat humans at the game, hitting the ball almost twice as hard as any real-life player.

A special software drives its strategy, while powerful and agile bars allow it to quickly adjust players’ positions on the field with extreme precision.

“The system can achieve a sub-millimeter precision in positioning, it can shoot at almost twice as strong as an average human player and (the system) updates the rods positions 300 times per second,” said EPFL student Leo Sibut.

It took the students six months to design and assemble the prototype. In order to see the ball, they equipped the robot with a high-speed camera located underneath the table’s transparent floor. The camera collects 300 images a second which are then processed by the computer to analyze the movement of the ball in real time. The computer then controls the movement of the arm.

The students who designed the table football robot now plan to give it a more sophisticated strategy. The current system only allows it to detect the ball, stop it, then shoot towards the goal.

“Next step is strategy. Now we have various information in addition to our own player, we know where the opponents are, so we could design a more advanced strategy where we deal with all this information to, for example, kick on the side to reach the goal of the opponent,” said Christophe Salzmann, who heads the project.

The students now also hope to set up a table football competition between robots, where programmers compete using different strategies.

Could this herald a new era where robots compete against humans in sports?

Some experts say robots would often win thanks to their speed and accuracy.

But the problem comes when they’re placed in uncontrolled environments, where a sudden gust of wind may change everything and not compute with their programming.

“It (the robot) doesn’t really know the world, it only really knows what we’ve told it, it’s probably only been ‘alive’ for two or three years,” said Peter J. Bentley, computer scientist at University College London.

“We’ve had 3.6 billion years of evolution to get as used to this environment, so I have to say I’m a little bit pessimistic. It will take a robot quite a lot of time, or it will take us quite a long time to develop these robots before they are in a position to challenge professional sportsmen.”