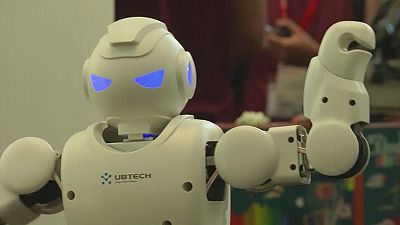 Among the TVs, the smartphones and the drones, robots held centre stages this year at Europe’s biggest tech trade show, IFA, in Berlin.

Robots have been in factories for years. It is just that now we are finally seeing them come in to the home.

Home robots especially are all the rage and are becoming increasingly affordable. The message is: let them do the hard work, while you put your feet up.

“We have been seeing robots around for quite a while. Is there a trend? Of course there is,” says Nicole Scott, editor of the Mobile Geeks news website.

“Robots have been in factories for years. It is just that now we are finally seeing them come in to the home. IoT (Internet of Things) is finally at a place where automation or types of use are affordable for the average consumer: so window cleaning robots, floor cleaning robots, robots that will go around the house to check on different things, like robots to watch your pets, or feed your pets.”

The devices can be programmed using a simple smartphone app. Japanese high tech giant Sony, for example, claims it has designing a robot that is not only capable of assisting with everyday needs but can form an emotional bond with users.

“Robots are a niche. They are solving certain particular problems in universities, in manufacturing. And eventually, just like the internet was a government product for 40 years before it became public, I think robots will be the same thing. The idea is ‘How can they become useful to the consumer?’,” asks Jaime Rivera, editor of mobile tech news website Pocketnow.

One popular high-tech tool is facial-recognition, which enables devices to detect whether someone is in need of a coffee, for example. Or, even better, one robot on show is able to recognise individual members within a household, to remember their schedules and provide reminders when necessary. The idea is to make robotics less scary with the aim of deploying more humanoid robots in various service sectors.

“We are not necessarily trying to replace all of what we do during our day with some sort of robot. Rather, I’m thinking we are trying to make everything smart,” says Joshua Vergara, head of production for the technology website Android Authority.

“Granted, there are a lot of industrial jobs and a lot of, let’s say, workforce jobs that could be replaced with robotics, but for the daily user, for the daily life of somebody, even like myself, it is more about controlling the parts of our life that we want to control with, let’s say, our smartphones.”

Another impressive robot on show, a levitating loudspeaker, walked the walk but didn’t necessarily talk the talk according to critics, who said the quality of the sound doesn’t quite match the ultra-cool look

“I would love to walk in to my house, have music playing when I walk in. But the problem is I have already invested in a stereo system,” says Pocketnow’s Jaime Rivera.

“I already have a bed, I already have a fridge. And these products were designed to last me 20 years. So why would I want to invest twice in a refrigerator if it is not going to make food taste better, you know? If it is only going to be smart enough to control the temperature and save me a bit of money down the line.”

And for Star Wars fans, the company that produced last year’s Christmas hit, the BB-8 robot, unveiled its so-called ‘Force Band’ for this Christmas. Tapping into the game play that has made Pokemon Go such a hit, it combines robotics and augmented reality, allowing users to control the BB-8 with hand gestures.