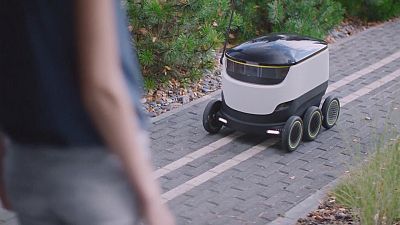 Picture the scene, you order your favourite take away food for delivery. As you fumble in your pocket for a tip and open the door, you are greeted not by a delivery person but rather a two-foot-tall robot. This could well be the future of your food or grocery home deliveries.

Hi-tech robots are set to take to the streets of several European cities this summer including Tallin, London, Bern and Düsseldorf.

European start-up, Starship Technologies, led by the co-founders of Skype, are unleashing the robotic helpers – after a series of successful tests.

“We have by now driven around 5,000 miles or 7,000 plus kilometres on public sidewalks. We have seen almost 400,000 or half a million people, we have learned a lot about public perception and social acceptance which has been overwhelmingly positive so now we will start to learn to do real deliveries.”

The six-wheeled carriers use pavements just like pedestrians and travel at around three kilometres per hour.

Integrated navigation and special software has been designed to stop any accidents like bumping into bemused pedestrians.

Customers can track the robot’s location with an app and speakers and a microphone will even allow you to communicate with it directly.

Allan Martinson explained,
“it’s basically not a driver, not a guy on a scooter, but a robot driving up to your doorstep and announcing that your pizza or Indian or Japanese is ready. It will be a completely different experience to anyone expecting food delivery”.

The robots are designed to deliver items within a three to four kilometre radius in suburban areas.

“What’s been really exciting to see is the advancement of technology, particularly in the last three of four years around robotics which has made this really achievable in the coming years, not ten years away.”

But don’t worry about being taken-over just yet, each robot is monitored by humans who can take control at any time.