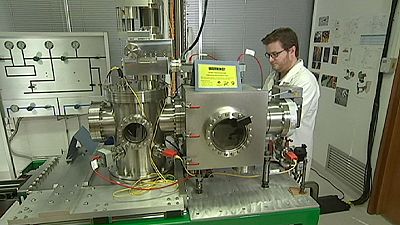 Australian researchers say they have created a microscope that will allow scientists to examine human, plant and animal samples closer than ever before.

It enables them to examine parasites, bacteria and cell cultures in their true original state, without damaging them.

What is being described as the ‘first helium microscope’ is a massive mound of metal developed at University of Newcastle, just north of Sydney, Australia.

Researchers have nicknamed it SHeM – the ‘scanning helium microscope’. Traditional microscopes use light which can damage delicate samples.

“For the first time we’ve been able to see not just the topology of the surface but also an indication of what the surface is made of,” said Paul Dastoor, a physicist at the University of Newcastle in Australia. “We’ve started to see differences in the image depending upon the chemical character of the surface.”

Researchers say the microscope could even help study delicate surfaces such as solar cells which, when analysed through electron microscopes, can boil.

But the device’s main role is to gain new insights into nature, as Dastoor explains: “Biological samples of all of these samples that are delicate will be damaged under conventional microscopies.”

The microscope works by passing a helium beam across the surface of an object that might be too sensitive or dangerous to examine under an electron microscope.

It is not yet known when the helium microscope will be commercially available, but the university says its already had interest from around the world.

“We will now have a resolution that is equal or better than any other technique on the market, “ said Adam Fahy, another physicist at the University of Newcastle.

The next step, scientists say, is making a smaller, bench-top model that’s far more powerful and can take 3D images.

The developers say a new, more powerful prototype should be ready within 18 months.

Why have COVID tracing apps been unsuccessful?