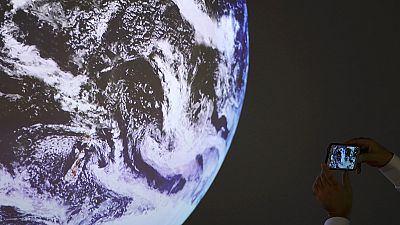 Belgium’s Frank De Winne is one of the few people who can really tell you what planet Earth looks like as a whole.

The ESA astronaut spent six months on board the International Space Station, and describes the feeling of looking down and seeing “a lot of clouds, a lot of weather systems, and then the black, the immense universe”.

Astronauts are often struck by the beauty of the remote areas they see from orbit. “When you look from space, sometimes you see these small islands that are formed by these coral reefs, they are this very crisp, light blue colours that are extremely beautiful to see,” he told Euronews.

The land masses also reveal a huge variety of colours: “You have of course the greens from the woods, but then when you fly over deserts they are brown, reddish, yellow.”

And all the time you are aware of the fragile atmosphere that clings to the planet. Looking to the horizon, De Winne described what he saw: “You see this very, very thin blue line, this is the thickness of our atmosphere. This is what gives us life, this is what makes that this planet here is livable.”

Frank is a former Belgian air force test pilot, and the first-ever European commander of the ISS. He now heads the European Astronaut Centre. Frank flew a 9-day mission to the ISS in 2002 and a six month mission to the ISS in 2009. During his long-duration mission he was the main operator of the Japanese robotic arm to dock Japan’s HTV cargo ship. Frank is from Ghent in Belgium and is married with three children.
Next Series