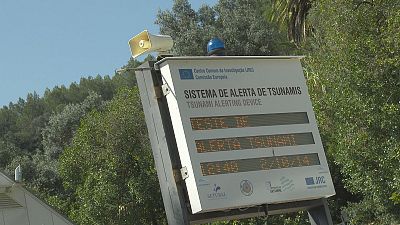 The ocean can be ruthless and unpredictable. Tsunamis strike without warning, taking thousands of lives. How can we spot an approaching wave in time to save people?

Outside Setubal, Portugal, scientists from a European research project are testing a device that automatically detects a rising wave to alert people on the nearby beach.

“We want to prove that measuring the sea level at a certain location, and analysing that data in real time, makes it possible to trigger an alert at a completely different point,” explained Alessandro Annunziato, head of European Crisis Management Laboratory, JRC.

The active sonar uses acoustic waves to measure how far the sea surface is. If water is quickly approaching, that means a big wave is passing under the device.

“Normally the sonar is mounted on the fixed support, but for this experiment it moves up and down to simulate the sea level rising or decreasing,” said Daniele A. Galliano, researcher in ICT for crisis management, JRC.

The movement of the sonar mimics the arrival of a real tsunami typical to this region. In 1755, the city of Lisbon was destroyed by such wave, and another event of this scale is not impossible.

“This curve represents the tsunami wave, passing under the sensor, so the measured water height increases rapidly,” said Alessandro Annunziato.

So, the system has detected a rapid change of the sea level. Where does the alert signal go?

All data on natural disasters coming from various sources is monitored at the European Crisis Management Laboratory of the Joint Research Centre (JRC), the European Commission’s in-house science service in Ispra, Italy.

GDACS – the Global Disaster Alert and Coordination System – works automatically, analysing threats and alerting subscribers via email, text messages and other channels. Subscription is free and open to everyone.

“We monitor not only tsunami, but also earthquakes, floods, tropical cyclones, which are labeled with a colour – green, orange or red depending on the threat we think this even represents to the population,” said Alessandro Annunziato.

Back in Setubal, the test message got to the digital panel at a beach in about 30 seconds, necessary for the device to identify and confirm a tsunami wave, excluding any false alerts. At this distance from the sonar, that leaves about 3.5 minutes to evacuate people before the simulated wave “hits” the shore.

“What makes this solution particularly interesting is that it combines the siren with the written information on the panel, which is quite unique,” Fernando Carrilho, researcher in seismology, IPMA pointed out.

The results of this test could help to create an international early warning system to protect the European shores.

Do you know: can you run away from a tsunami?