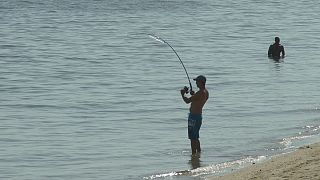 Very big tsunami are very dangerous, because they can create waves and rise water which immerse people without any previous warning or information. People are convinced to be able to survive just by running, but it was shown that a tsunami wave can catch a person running. And also debris that a tsunami wave normally takes with it does not allow people to survive after being hit by a tsunami wave So the problem is how to inform people who are under risk in shortest possible time, and a lot of time in advance so that they can survive.

Early warning systems are part of the solution. An important part is also the education. People have to know also what to do. If they feel an earthquake, for example, they have to immediately go to a high ground, and that was the reason why people survived in Chile in 2010 – because feeling an earthquake they could go in a high ground. But in any other areas, like for example here in Portugal, they won’t feel and earthquake, because the earthquake is so far that it’s not felt in places like this. So we need other mechanisms to alert.