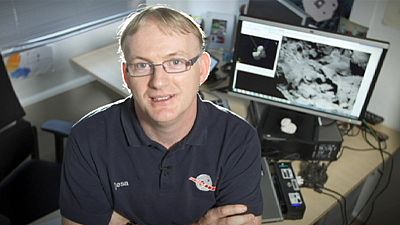 Rosetta is carefully eying up its prey as it prepares to drop the lander Philae onto the comet in November. The ESA spacecraft has been flying alongside comet 67P Churyumov–Gerasimenko since August, and has spent that time scanning and mapping the surface in detail. Now a landing site has been chosen for Philae on the ‘head’ of the rubber duck shaped comet.

All year we’re following the mission in Space, and this month we popped down to ESA’s astronomy centre near Madrid to meet the science operations coordinators. They spend their time managing the demands of the different science teams who developed the instruments on Rosetta, making sure that the spacecraft’s time around the comet is used to maximum effect. Right now, they’re looking forward to the landing operation.

Laurence O’Rourke, Rosetta Science Operations Coordinator, ESA, says: “The tricky bits are the unknowns of course. Every day it is an object which is coming alive every day, it’s producing more gas, more dust.”

Larry’s close colleague is Michael Kueppers, another Rosetta Science Operations Coordinator: “The landing site has now been selected, and of course we hope that it will be successful. And it is clear that it is a risky business, but I think it will be a success.”

“The landing itself is a huge event. We will separate the lander at a certain distance. It says bye-bye to the mothercraft which has brought it so far, and within about an hour or so it starts uplinking the images, so of course getting the signal from the lander will be very important,” says Larry.

So what’s Larry’s message to Rosetta? “Hey Rosetta, you may be hundreds of millions of kilometres from here, but don’t worry, you’re not going to crash into the comet, because we know exactly where you’re going to go. Keep working, keep alive, and keep sending those beautiful data, those beautiful images to us.”

Michael is full of optimism: “Rosetta, it was a long journey, but now you’re there. I trust in you, we will have a great journey until the end of the mission,” he smiles.