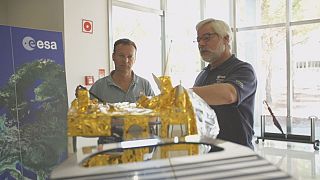 Venus is our rather weird neighbour, a strange world where the Sun rises in the west and sets in the east, and a day lasts longer than a year. And yet this searingly-hot planet began its life with much the same materials as Earth. So why is Venus so different? We begin our close encounter with Venus at the Observatoire de Paris, an institution founded in 1667 which has seen all manner of new ways to study the solar system – including a raft of devices to watch Venus pass in front of the Sun.

Thomas Widemann, Planetary Scientist, Observatoire de Paris showed us one of them, a precursor to the early film cameras: “This is a unique example of Janssen’s Revolver – this instrument was designed at the Observatory of Paris to observe the transit of Venus in 1874 and 1882.”

Today the Observatoire de Paris remains at the cutting edge of planetary science. There Widemann spends his time there trying to solve the puzzle of the planet Venus.

“Venus and Earth are like sister planets. They were formed in the same part of the solar system, even closer than Earth and Mars are, with the same basic ingredients, the same gases, the same rocks that were spinning around the early solar system. And yet these two planets had completely different destinies,” he says.

So Venus began more or less like Earth. But now it’s bone dry and cloaked in a thick, choking atmosphere of sulphuric acid and CO2.

Håkan Svedhem, Venus Express Project Scientist at ESA, describes what it’s like on the surface: “It has a very dense atmosphere, up to 97% of carbon dioxide, very strong greenhouse effect, and the temperature down on the surface is more than 450 degrees Celcius, and the pressure is 92 bars, it’s almost a hundred times what it is on Earth, so it’s a very, very unpleasant place to be.”

Unpleasant, and also unusual – this is the only planet which rotates clockwise. There’s more, as Michel Breitfellner, ESA’s Venus Express Science Operations Coordinator, tells Euronews: “Venus is the only planet in the solar system that needs more time to rotate once around its own axis than it rotates around the Sun. So it’s 243 days for one Venus day, and it’s 224 days for one rotation around the Sun. “

In 2005 ESA launched the Venus Express spacecraft to have a closer look at this oddball planet. After eight years of scanning the dense clouds below, the team sent Venus Express skimming into the top layer of the atmosphere, a technique known as aerobraking.

Don Merritt from ESA’s astronomy base near Madrid explains that the spacecraft’s underside was the face that went first into the atmosphere. “This face of the spacecraft, which had been attached to the rocket originally when it was launched, was most able to take the forces and the temperatures. We also turned the solar panels, to maximise the amount of friction and to get the most amount of braking.”

The aerobraking manœuvre offered the first ever close up view of Venus’ upper atmosphere, and it wasn’t what was expected.

“What we saw that was a little unusual was the variability in the pressure, as if there were waves within the atmosphere. And so that possible wave-like structure was not expected, and analysing that data will keep scientists busy for a little while yet,” Merritt explains.

The science team has another puzzle from the Venus Express data. They’ve noticed that the Venusian winds are getting faster.

Håkan Svedhem explains: “When we arrived at Venus eight years ago we detected winds of 300 kilometres per hour – very fast – but what has happened during these years until now they have actually increased. We have now seen winds of 400 kilometers per hour, and we can’t really explain why that has happened.”

Yet more riddles lie in the landscape of the planet. One of the very few photographs of the surface of Venus, taken by Russian probe Venera 13, shows no sign of volcanoes, but plenty of volcanic rock.

Widemann has an idea what may be happening: “The surface of Venus is relatively young, on the scale of the solar system. And there’s a contradiction for us between the absence of volcanic and tectonic activity today, and this surface which despite everything appears quite young. So maybe there are some rare, powerful and violent geological processes that could resurface the planet in a catastrophic way, creating a kind of rebirth of the Venutian crust.”

So what could possibly have happened to Venus to turn it into such a hellish place? There are some theories, if not yet proof:

Breitfellner says: “There must have been a major disaster in the early history of the planet, where it collided with a big other object, and this made it stop its rotation, and I think this was really the turning point in the life of Venus.”

Clues as to what happened in the past may yet be found in the vast amounts of data gathered by Venus Express, and the planet itself will continue to entrance and surprise.

“Venus is the brightest planet in the sky. It’s the brightest light after the Sun and the Moon. It’s a planet that’s part of our cultural heritage. So it’s this special personality of Venus as a shining, cultural object that attracts me the most. Maybe even more than the scientific reasons that we’ve talked about,” says Widemann.

Comet Hunters: 'The landing is a huge event'