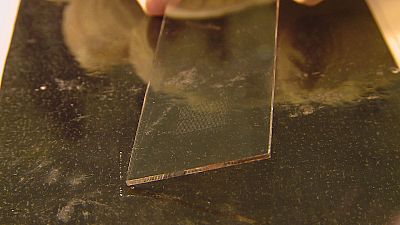 Almost 100 million Europeans do not have access to safe, reliable water.

As conventional methods of detecting pathogens can be complex and take time, developing an effective system to quickly test water has become imperative.

Those working with the project say monitoring water quality is vital to protect the health of people and animals.

Marine biologist Ulrich Breitenbach explained: “In the summer, especially in lakes, there are cases where an increase in pollutants can occur. For example, cyanobacteria produces different toxins. It is possible for animals to drink from the lakes and suffer health problems.’‘

In addition to measuring the wind, temperature and salt content of the water, samples are sent to the laboratory for further testing.

Through an innovative filtering system around 50 litres of water is reduced down to one litre.

The samples of the concentrated water are then sent out to different partners involved with the project for further analysis.

Claudio Orlando Gualerzi, a molecular biologist at the University of Camerino, explained this is a life saving effort: ‘‘The project began out of a need to address all the health problems linked with water. Every year there are more than 150,000 deaths due to diseases contracted directly or indirectly from pathogens and toxins that have contaminated the water supply.’‘

The project has developed a universal micro-array chip, to detect microbes including bacteria, viruses and cyanobacterias. About the size of a small postage stamp, the chip is printed onto glass slides.

‘‘A key step in the preparation of the micro-array, is printing the actual bio-chip. Here we can produce hundreds of small spots of less than a millimitre in diameter,’‘ says Wilfried Weigel, a chemist at Scienion AG.

The micro-array detects microorganisms through DNA and RNA sequences. The bio-chip also assesses water quality faster than traditional methods. Both are important advances in water treatment.

‘‘The great advantage of this method is that we get an answer almost immediately. In a day we can detect up to 150 different species in the water. In a very short space of time we have an answer,’‘ explains Weigel.

At a laboratory in Lugo, Spain, scientists have also developed a method called Luminex, which uses antibodies, to detect water based toxins.

Amparo Alfonso Rancaño, a biochemist at the University of Santiago de Compostela, detailed their work: “We map water from different sources, meaning that we are studying the presence of toxins in different European countries, which is vitally important. However, this does not mean that drinking water is contaminated: we’re talking about lakes, about water that has not been processed for human consumption. “

The research enables a better understanding of Europe’s lakes and rivers and levels of toxins at different times of the year.

For more information on this subject, go to: MicroAqua

Do you know: can water kill you?