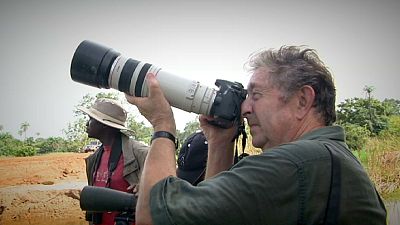 In this edition of Focus euronews’ Francois Chignac reports on ecotourism in The Gambia.

“The African continent is known for its wildlife and flora. But in The Gambia you have to look up to the sky. Watch the trees and you will see the country is one giant open-air aviary. Here there are more than 500 species of birds, some of them very rare,” explained Francois who visited Tanji Bird Reserve in The Gambia’s National Park.

“Behind the reserve you have the Atlantic Ocean where birds come from different continents and breed in an island here. This is why this nature reserve is very important for the Gambians and also for tourists,” explained Solomon Jallow an ornithologist and professional guide.

“Our birds are friendly, you can approach them, you can go very close to them. And we have very, very colourful birds and very important birds in the bird watching list. When you come at a certain time you see most of the species that you must see in Africa you see them in The Gambia,” he continued.

It is easy to forget The Gambia is a tiny dot on the map of Africa. East to west it measures 480 kilometres and is just 48 kilometres wide. This little jewel of West Africa favours ecological tourism, reconciling the environment, wild life and local community.

Amateurs and professionals flock to the bird reserve to record and photograph the numerous species.

“It’s a perfect place to start in Africa because you’ve got very good guides, you’ve got wonderful habitat and the birds are basically very easy to see,” one bird watcher told us.

One example of how The Gambia has decided to develop ecotourism is in Makasutu a word which means ‘sacred forest’ in the local dialect. It was voted best world ecolodge by Britain’s Sunday Times.

Set within lush bush mangroves on the tributary Makasutu is a privately owned ecotourist reserve. It combines ecotourism and responsible travel with sustainable economic development in line with the ethics of the two owners – James English and Lawrence Williams.

Visiting groups are kept deliberately small to reduce any detrimental impact on the fragile eco-system of the forest. Solar power provides the energy needs and locals play a vital role in running the reserve as Managing Director Lawrence Williams stressed.

“All of our staff that work here come from the local villages. But also, we’ve been concentrating a lot on the forest and trying to make sure that the environment around here, not just our environment, but the forest and mangrove, is protected as well.

“One of the things we set up is something called the Ballabu Conservation Project which is an 85 square kilometre area that surrounds Makasutu. And within that, we have a new project ‘wide open walls’, which is a community-based street art project. So for the last three years I’ve been bringing artists from all over the world to paint in the local communities. We paint on people’s houses and the plan is to hopefully start bringing tourists into the area where they will pay to come in and see the art on the walls. And that would be a direct income for the local communities.”

Nestled in the African forest at the edge of miles of deserted beach is the Sandele Eco Retreat and its award-winning lodge.

It is a winner of The Guardian newspaper’s ‘Ethical Travel Award’ with tourists’ comfort provided in the most sustainable way possible. But it is not just about those who come to visit.

“Most of the philosophy is about helping local people,” explained the retreat’s manager. “The building is done by local people. We don’t use cement, we don’t use electricity, solar power is all that is used.”

Established in 1979, Africa’s longest running chimpanzee rehabilitation project is to be found in The Gambia. It is now home to over 100 chimps. Wild chimps disappeared from The Gambia in the early 1900s but now four separate social groups can be found on Baboon Islands where the project is based. Locals play their part here.

“I feed them from time to time. I’m not the only one. There are two or three of us,” said one man.

A small, eco-friendly camp is located on the banks of the river overlooking the islands which has become an important source of revenue.

“The chimpanzees are our priority but one of the things we have a problem with is actually funding them. So we do have some funding externally, but we have developed an ecotourism project to help to us actually cater for the chimpanzee and do our job in terms of looking after the chimps,” project manager Patrick Lewis explained.

Bonus:
Tourism in The Gambia, interview with the Minister of Tourism and Culture

Tourism in The Gambia, interview with the Minister of Tourism and Culture