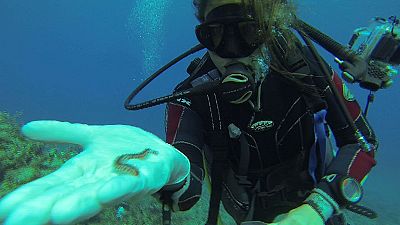 Off the northern coast of Crete, marine biologists from the Hellenic Centre for Marine Research are diving for new specimens.

Scraping algae off the rocks, they gather tiny animals living on the sea floor.

Taking part is Sarah Faulwetter, a PhD student and Head of the Biodiversity Informatics Group in Crete.

She is well acquainted with the waters around the island: “The Mediterranean is one of the best studied seas in the world, since this is where European sea research started – but even here we still find new species, like the one we described last year. And some of the other areas of the ocean are relatively under studied, so with more scientific effort there are millions of new species to be found there.”

Fireworms are particularly interesting: these fluffy creatures covered with stinging bristles are extraordinarily resistant to environmental pollution – they survive even in waters severely contaminated by heavy metals.

The Mediterranean fireworms are genetically identical to their Caribbean twins, but their morphology is different. This causes some controversy among scientists trying to understand whether the two are the same species or not.

The field of science that identifies and describes species – taxonomy – was founded almost 300 years ago by Swedish biologist Carl Linnaeus.

Scientists are still using printed illustrations as a reference when studying specimens through optical microscopes. It is a slow and laborious process.

Sarah Faulwetter explained: “In principle, we still do the same work: we look at the animals, we dissect them, we draw them, we describe them and we publish them. So it’s the same thing that has been done for 300 years.”

A new method, developed within a European-funded project, advances taxonomy to a new technological level.

In a demonstration of how it works, one of the fireworms captured in the sea is put inside a computed tomography scanner. The device takes a series of X-ray images that will be automatically converted into a highly detailed virtual 3D model of the specimen.

Senior researcher Christos Arvanitidis is head of the Hellenic Centre for Marine Research’s marine biodiversity section. He told euronews: “This is a meeting point of three different disciplines. One is traditional taxonomy, another is informatics, and the third one is bio-imaging, which is actually medical science. With this method, we’re taking advantage of the integration of these three disciplines.”

It takes some time to make a 3D model from X-ray scans, but once it is done it can be manipulated on screen in all possible ways. Any dissections can be made virtually, preserving the valuable real-life specimen intact.

Sarah Faulwetter added: “This technology gives the scientist a unique opportunity to study the animal in 3D on the screen, without having to cut it open – whereas in conventional taxonomy we need a scalpel, we need to cut it open under the microscope and destroy the actual specimen”.

The speed and efficiency of the new technology will help scientists around the world in their ongoing search for millions of yet unknown species living on Earth.

More information on this topic is available here