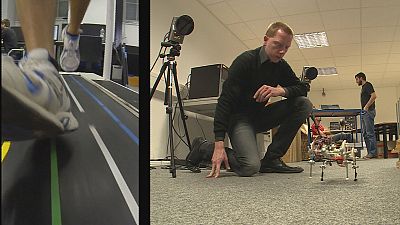 Could machines learn to walk? Legs have their advantages, especially on uneven terrain, but scientists have struggled for years to find a way to create in robots something we take for granted.

To help robots get on their feet, researchers at the Darmstadt University of Technology have been learning exactly how people and animals move.

Andre Seyfarth, the principal investigator at the LOCOMORPH project, said: “We’re capturing the kinematics of the movements, detecting how the joints and segments are moving, but we’re also able to record forces, meaning how much force you exert on the ground when you move.

The idea is to create robots that can mimic humans as closely as possible. To do that we need to understand basic human locomotion, and based on this data gathered here we can design new robots.”

Studying human volunteers and animals, biotechnologists built a computer database that serves as a reference for robotic engineers.

Martin Groß, a Zoologist from Darmstadt University of Technology explained how it works: “We use the motion-capture system, and it works with reflective markers on the skin of the animal or the human. The cameras flash infrared light with a frequency of 250 Hz. This gets reflected by the markers and recorded. The software then makes a 3D model.”

Researchers want to better understand the transition between walking upright and running on all fours. This should help to make robots that can move one way or the other depending on the environment.

Robotic engineers test their new models using a specially developed robotic construction kit. It’s a light bendable skeleton that can be easily rearranged in various ways. Each of its springy legs is controlled by a microchip that can be programmed for different walks.

Robotics and AI researcher, Jørgen Christian Larsen, from the University of Southern Denmark explained why they are so keen to have a robot that walks: “If we want to have robots as helpers in our homes and elsewhere, they need to be able to walk and manoeuvre in our environment. Today we have robots on wheels, and they’re quite good, if the terrain is laid out for them – but when they get to a staircase, they’re kind of lost. So in order to get them to really help in real environment, they need to be able to walk in our environment.”

There are other uses too according to Andre Seyfarth: “With the robot platform that we develop here, we first want to understand the basic functions of human and animal movement, but later on, this technology may be used to guide the design process towards more functional prosthesis or orthosis, for instance.”

That may be a journey of 1,000 miles, but it begins with a single step.