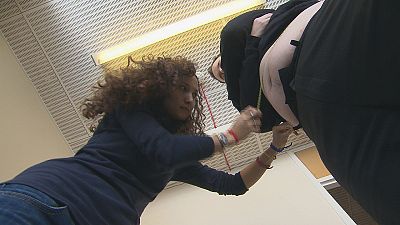 It looks like a restaurant kitchen, but it is an advanced research institute on human nutrition in Aberdeen, Scotland. Food is served to study volunteers, not customers. And for this particular study, dishes were cooked up to make volunteers eat less, but still feel happily full.

“The types of foods that I ate were keeping me fuller for longer. So I was not thinking about snacking and things like that. So that has been a good thing,” says volunteer Gordon Irvine.

The study is the cornerstone of a European Union Research project aimed at identifying natural food ingredients that regulate appetite by enhancing satiation and reducing hunger, thus fighting against overeating and obesity.

“We are talking about protein ingredients, herbal ingredients, types of carbohydrates, certain starches, and we are talking about soluble fibres as well. And we use this in a variety of foods. We use them in baked goods, biscuits, in smoothes, yoghurts, sodas, waters… a range of industrial food products that people can easily incorporate into their daily eating pattern,” says psychologist Jason Halford of the University of Liverpool, a member of the EU-funded Satin project.

Volunteers in the project are offered 3 meals a day during 52 days. In exchange they let researchers know how their bodies react to the mysterious ingredients added to the recipes.

Researchers want in particular to understand how those ingredients affect appetite control, fat evolution and weight management in the volunteers’ bodies.

And the first results are promising.

“It works well for me. The food provided helped keep me full. It saves you snacking in between meals. I lost weight, so it certainly worked for me,” says volunteer Carol Abel.

The researchers´ next step is to try to understand how some food ingredients, like soluble fibres, fill us up quicker than others. Meticulous laboratory work has already provided some tips.

“Some of these fibres will make you feel full just because of their physical presence in the gut. And the human body has pressure sensors in the gut that confirm that feel of satiation. But there is also a hypothesis on the role of products from the microbial activity. Some of the acids that the microbes produce interact with receptors on the gut’s surface and elsewhere in the body and that can affect hormone production. And those hormones are known to have an effect on how hungry we feel,” says microbiologist Harry J. Flynt of the University of Aberdeen.

But the final expected outcome of the research is not only to fight against overweight and obesity in Europe, scientists say.

They also hope that their knowledge will eventually help them to contribute to the development of innovative foods and novel food processing technologies to be offered to European consumers soon.

“We are starting to model what the ingredients that we are testing are doing within the human gut. Once we have the results of those tests, we will go back to the laboratory, develop new ingredients, and we will take them back into new clinical trials. Our aim is to have commercial partners to produce products that people will really want to consume on a day-to-day basis. Otherwise the foods we are aiming to produce would be useless, they would not have any practical value,” says Jason Halford.

“This food was very, very nice. It tasted very, very good. There was no lack of flavour, nor any problem in the textures or nothing like that. It was very enjoyable food. So if in the future there is a product developed that has the same flavour, textures, looks the same and feels the same, of course I will volunteer to try it,” says Gordon Irvine.

Researchers hope to see these innovative, satiating foods being served on Europe´s dinner tables from 2016.