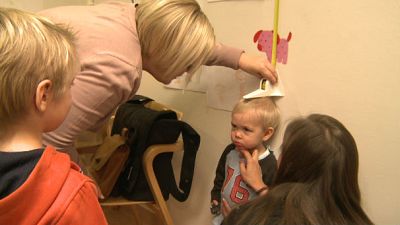 Insulin-dependent diabetes is on the rise all around the world, but the cause of this disease remains unclear.

There is a theory, however, that kids need a bit of dirt to build up their defences against this and other autoimmune diseases.

Looking for answers we began in Finland – the country with the highest incidence of Type 1 diabetes, where we met Irina Kim who lives in a suburb of Helsinki. When she was 10, she was rushed to a hospital after suddenly feeling very ill. She recalled that incident: “Frankly, I’m lucky to be alive – it was terribly bad, I had to recover in the emergency ward for several days.”

Irina was diagnosed with Type 1 diabetes, and since then she has needed regular insulin injections to maintain proper blood sugar levels. She explained: “I have to always have syringes at hand: to take an injection of rapid-acting insulin before every meal, and a long-acting shot every evening.”

While nobody knows for sure what causes Type 1 diabetes, a European research study tests the “hygiene hypothesis”, suggesting that clinically clean homes and bacteria-free food may actually undermine our health.

The DIABIMMUNE research project screens hundreds of infants and young children in Finland to find out why so many of them will fail to develop resistance against autoimmune diseases later in life.

Sari Mildh-Laakkonen is a DIABIMMUNE study participant, she believes in the hygiene hypothesis. “It might be that it’s too clean, the environment here. That’s maybe one reason why we have allergies and everything like that,” she said.

Various tests samples and other data collected at hospitals are being delivered to the laboratories participating in the international project.

At the Biomedicum Research Centre in Helsinki, the investigation is led by Professor of Paediatrics at the University of Helsinki, Mikael Knip. He has taken multiple samples from many children of all aspects of their environment, from food and breast milk, to the dust in their beds.

These samples may contain clues as to which important infections in early life may be missing in Finland, with its largely urban population, sterilised milk, strong cleaning disinfectants – and cold climate that inhibits spreading of pathogens.

Working with him, Heikki Hyöty, Professor at the University of Tampere Medical School said: “Currently we believe that infections which the child experiences before the age of one are very important, and if the child lacks these infections, the immune regulation doesn’t develop, and that leads to the diseases like diabetes or allergies.”

To test this hypothesis, scientists also took samples from neighbouring Estonia and the Russian Republic of Karelia, where the incidence of Type 1 diabetes is six times lower than in Finland – possibly due to the lower living standards.

Professor Mikael Knip commented on this saying: “There’s evidence that you have heavier microbial load in Russian Karelia compared to Finland, and of course we think that fits into the hygiene hypothesis. With more microbes early in life you have less autoimmune diseases and allergies.”

Across the Finnish-Russian border is the Russian Republic of Karelian. Its capital, Petrozavodsk has a population of around 270,000, and more than 60 nurseries participate in the DIABIMMUNE study. Volunteering families take the same tests, measurements and fill the same questionnaires as their Finnish counterparts.

The questionnaires allow scientists to gather data on the condition of every child’s early life, to see how this correlates with symptoms of predisposition to diabetes.

Svetlana Pylova, a DIABIMMUNE study doctor explained the process: “Each family fills in several forms, starting with detailed questions on the mother’s pregnancy, further development of the child, family illnesses, information on vaccinations and so on. As a result we get a considerable amount of data which is entered into our online database.”

The study, which will continue until at least 2013, should help scientists discover the microbial factors provoking or preventing diabetes. This could result in the development of a vaccine against the disease – using, for instance, pro-biotic food products for children.

Another DIABIMMUNE research supervisor Natalia Dorshakova explained where they are at the moment, and where they hope to be with treatment of the illness in the near future: “We have reached a certain success in treating diabetes. But so far we can only treat the symptoms and fight complications. Our real task is to prevent the autoimmune process from starting, or at least to stop this process if it is already developing in the pancreas. This is why our goal is to find the causal factors of diabetes. When we get to know our enemy, we will know how to fight it.”

So far, tens of thousand of frozen test samples from Karelian children are stored in Petrozavodsk: the researchers are waiting for the expected amendment in Russian legislation that would authorise export of biological materials for studies to Europe.

Meanwhile, another European project is underway in Montpellier, France.

A new high-tech system is currently going through clinical trials. It constantly monitors the blood glucose levels of diabetic patients, warning them if corrective action is needed. Wireless sensors fixed on the patients’ body measure their blood composition and physical activity.

The portable device indicates the fluctuations of glucose in the patient’s blood and predicts what will be needed in the future based on each patient’s individual characteristics. The system is being tested on 60 volunteers in three European countries. One of those is Frenchman Pierre Favantines, he said of the device: “It’s not much bigger that a mobile phone. When I don’t feel good, and am approaching hypoglycaemia, I take it out from my pocket, push a button, see the advice and follow it.”

The system takes into account physical activity, meals, insulin injections and other factors allowing it to make timely and accurate predictions.

Another participant of the study, Christophe Nguyen, praised the device: “Knowing about your lowering glucose level allows you to take action – eat some sugar – to avoid Hypoglycemia. And the same with Hypoglycemia: a sound signal that we receive allows us to correct that and to avoid the long-term side effects.”

For the clinical study, the indications of the DIAdvisor device are controlled using blood samples. According to one of the study leaders, Professor Eric Renard, this unique prediction system can be extremely helpful to patients who require such advice in their daily lives.

“The most difficult thing for those with diabetes treated with insulin is making decisions,” he said. “Very often, even knowing that the glucose level isn’t right, even educated patients don’t know what to do because they’re afraid to make the wrong decision. So this system will reassure them, telling them exactly what they need to do. The first tests have shown that this system is correct in more than 90 percent of cases. And it never gives a wrong advice: sometimes it can be a little imprecise, but always generally right.”

Further development of intelligent algorithms should allow this device to create an artificial pancreas, making insulin-dependent diabetes a lesser problem for millions of people around the world.