In eastern Germany some members of a little-known group claim they are being ethnically cleansed, not by militia groups, but by the coal mining industry.

Bulldozers have so far destroyed over 130 Sorb villages to make way for the mining of Europe’s dirtiest kind of fossil fuel – brown coal, or lignite as it is also known.

Brown coal mines are open cast and devour vast tracts of land. As well as whole villages farming and wildlife are destroyed.

The Penk family live in the village of Rohne. They feel their whole culture is also being destroyed.

Christian Penk takes care of his grandmother’s grave in the nearby cemetery, which is rooted deep into the history of the Sorbian people. But dig down just a few metres more, and there are huge layers of brown coal. He fears this sacred place will be destroyed, and says the industry is also damaging the living.

“We are living in between three brown coal power stations. The most important value in life is health. But many people here around have suffered from cancer,” says Christian.

His father was one of them. As yet there is no proof of a link between cancer and coal, which is why the Penks are calling for a comprehensive study.

But although its accepted that brown coal is one of the worst pollutants, Germany still plans to open more lignite mines.

The village of Proschim has been ear-marked for destruction, along with its church. Residents say the plan must be stopped.

The spreading pits have already eaten into huge parts of local land he says, and he fears for the remaining 80 jobs on his farm.

The village of Horno was rebuilt after the original settlement was destroyed to make way for a pit. New Horno has road signs in German and Sorbian.

Local resident Thomas Burchardt remembers his lost childhood. As a teenager he witnessed the destruction of eight churches out of the 29 that were eaten up by brown coal pits.

“I saw the village Horno dying,” says Burchardt. “When the destruction began they rooted out the the village trees, they pulled up the pavements, they dismembered the village – really, it hurts. There is no need for it. Germany massively exports electricity. Our region shouldn’t be sacrificed just for export reasons. And furthermore, it harms the climate. Brown coal is the dirtiest energy source existing.”

In Horno’s reconstructed church there is a local museum called ‘The Archive of Extinct Villages’.

The Interactive installation transports you into the past. Thomas is a Sorb himself – and speaks up for the community on the regional ‘brown coal committee’.

Many of the pits and power stations are owned by Vattenfall, a public company from Sweden that says it wants to get out of the dirty coal, but insisits lignite is still needed, at least for a transitional period.

“Who is going to produce electricity when there’s no wind, when there’s no sun?” asks Vattenfall spokesman Thoralf Schirmer. “How do you store renewable energy? All those essential questions haven’t really been answered, so far, in my opinion. And therefore we go for the assumption that brown coal production as well as power generation with brown coal will very likely go on after 2020, until 2030 or maybe even until 2050.”

But before those plans were approved, fossil energy lobbyists managed to get them spiked.

Claudia Kemfert is the Head of Energy Department at DIW, the German Institute for Economic Research.

“Germany has a problem: the coal lobby is very strong indeed,” says Kemfert. “It could be that the agreement between the government and the coal industry implies hidden subsidies, in which case it would breach EU law.”

Across the border in western Poland an abandoned castle used to be a kindergarten. When private investors tried to make it into a hotel the plans were blocked. The authorities had reserved the site for a possible brown coal pit.

“For years and years the building was abandoned,” says Anna Dziadek of the organisation No Coal Pits. “The castle is falling into ruin because the State agency in charge refuses to sell it. The reason – brown coal plans. Politicians and brown coal lobby groups promise open cast pits, they promise a new power station, they promise huge wealth and fortune, but small investors, small steps are not authorised.”

Anna still believes that she can stop the Polish energy company PGE from sending in the bulldozers to pull down villages and her friend’s farm with them.

She says a new pit and power plant would cost around seven billion euros, but the money is not there she claims, and neither is the support of local people.

“We had two local referendums In 2009. The people don’t want any further investment in brown coal. Sooner or later the brown coal lobby has to stop these sick plans.”

Back in Germany the environmental activist group 350.org says it has already
convinced global players such as the Rockefellers, and major French and German insurance companies to withdraw funding from ‘dirty’ investments.

“By now, we’ve already reached some real big investors, for instance the Government Pension Fund of Norway, that’s one of the biggest public pension funds and it’s pulling money out of the coal industry,” says the group’s Europe Communications Manager, Melanie Mattauch.

But in the meantime further villages are still at risk of being sacrificed for coal extraction.

For the Penk family back in Rohne, hope is the last thing to die. They still expect national governments and world leaders to put an end to brown coal mining.

“Regarding the climate conference in Paris, if decision-makers start to incline towards the interests of the industry, the prospects will look bleak.” says Edith Penk. “If you don’t fight, you’ve lost the battle before it starts… I myself will stand up and fight for my rights, I will fight to stop any further brown coal excavation.” 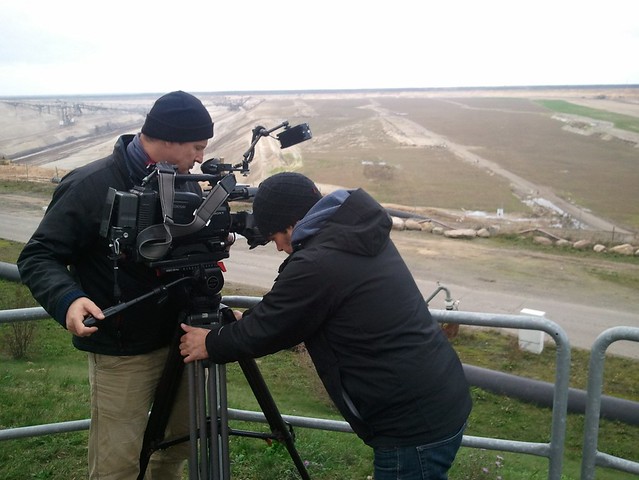