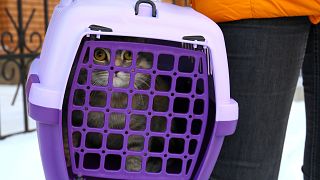 An animal rights group is suing French national rail operator SNCF for allowing a train to leave when staff knew a pet cat was on the tracks.

The cat was subsequently run over and died.

The incident, which occurred at Montparnasse station in Paris earlier this month, left the animal’s owners in shock.

“It's hard to get over it,” the cat’s owner, Georgia, told 30 Millions d’Amis (30 Million Friends) - the foundation suing the train operator.

How did a pet cat get run over by a Paris train?

Georgia was travelling with her 15-year-old daughter Melaïna when their cat Neko escaped from his transport bag. Neko then took refuge under the TGV train waiting at the station.

His owners pleaded with officers to delay the train’s departure, but were reportedly told “that it's not their problem, that it's just a cat and that we should have kept it on a leash.”

Pets are allowed to accompany their owners on SNCF trains either in a carrier or on a leash, provided other passengers do not object. Except for guide dogs, pets must have train tickets, which cost €7.

Another member of staff endeavoured to help the owners, but after 20 minutes of negotiations and attempts to call the cat back to safety, the train reportedly left the station, killing Neko who was still on the tracks.

“I saw Neko run under the train and… then we saw him cut in half. It was so violent,” Melaïna told 30 Millions d’Amis.

The owners were reportedly offered a free ticket to Bordeaux as compensation.

The owners were reportedly offered a free ticket to Bordeaux as compensation for their dead pet.

What does SNCF say about the incident?

SNCF claims that the cat was not visible under the train when it set off and that staff could not be sure whether it was still on the tracks. Only once the train moved did the cat become visible, they add in an email to Euronews Green.

The train operator also points to the dangers of going down onto the live train tracks, which are electrified.

The train operator said that it “regrets this sad incident” but added that “it is strictly forbidden to go down on the tracks, which would endanger the lives of the two travellers or of our agents... the risks of electrocution are real.”

Going down onto the tracks, or even standing too close to the edge of the platform, also carries risks of collision with a train. "The blast effect related to the speed of passage of trains can even fall down a person standing less than 1.50m from the tracks," SNCF says.

"SNCF is concerned about the animal cause and the safety of pets who travel by train," the operator adds. "This is not a situation that leaves us insensitive."

Animal rights group 30 Millions d’Amis is filing a complaint against SNCF for “serious abuse and acts of cruelty resulting in the death of an animal,” which carries a potential sentence of anything from a €75,000 fine to up to five years’ imprisonment.