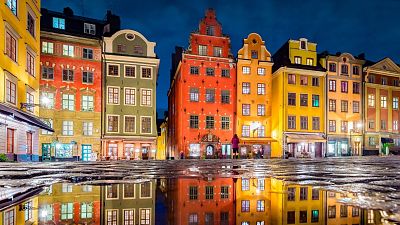 In a bid to become more sustainable, Stockholm has found an unusual ally, old Christmas trees and other garden debris. The Swedish capital is using green waste to power homes and reduce its carbon footprint.

People around the city are gathering up garden waste and dead Christmas trees from fellow residents and city parks, and turning it into an eco-friendly type of charcoal called biochar.

Produced via a special chemical process, biochar helps boost tree growth, improves soil quality and traps large amounts of carbon dioxide. Biochar is created when organic waste, such as fallen tree branches and dead plants, are heated at 200-400°C with little or no oxygen, in a process known as pyrolysis.

Normally, burning organic matter at such high temperatures would generate large amounts of methane or carbon dioxide emissions. But with biochar, the carbon is trapped in solid form.

Is biochar the future?

The Intergovernmental Panel on Climate Change (IPCC) highlighted biochar as a promising technology for keeping CO2 out of the atmosphere in its 2018 report. And according to a study by Cornell University in the US, producing biochar from organic waste could offset as much as 12 per cent of global emissions, equivalent to the carbon footprint of the global transport sector.

When biochar is buried in the soil it acts as a carbon sink, storing CO2 for thousands of years. Once in the ground, it fertilises the soil and boosts plant growth significantly.

“We have a process where we are taking carbon from the atmosphere and binding it back into the soil,” says Jonas Dahllof, founder of the biochar project and planning director at Stockholm’s water and waste department.

Dahllof says the Stockholm authorities decided to produce their own biochar after seeing the impact it had on local biodiversity.

Producing biochar from organic waste could offset the carbon footprint of the global transport sector.

“The city’s trees were thriving,” he explains, adding that local parks started importing biochar and adding it to soil over a decade ago.

“There are wonderful effects on the soil if you add large amounts of biochar,” says Saran Sohi, who leads the UK Biochar Research Centre in Edinburgh.

“Biochar soaks up nutrients, like a sponge,” he says. Because biochar is incredibly porous, it can store large amounts of water. This not only improves soil quality, but can also help prevent flooding.

An ambitious project in Stockholm

After winning €1 million in the Bloomberg Mayors’ Challenge in 2015, Stockholm built a pyrolysis plant which produces around 300 tonnes of biochar each year, equivalent to taking 700 cars off the city’s roads each year.

What’s more, rather than wasting the enormous amounts of energy generated in the production of biochar, the city is using it to power its district heating network.

The waste, energy and parks departments joined forces to develop the process. “We realised there was the potential to go beyond carbon neutrality,” says Dahllof.

The biochar project is one of the major initiatives Stockholm is trialing as part of its ambitious climate strategy. By 2040, the city aims to reach net-zero emissions.

It is a fully circular process which uses all excess waste, explains Dahllof. “The trees drag CO2 from the atmosphere. We use the carbon to produce charcoal and put it back in the ground. The byproduct is excess heat which we use,” he says.

The project, which is still in the pilot phase, plans to provide renewable heating to up to 400 local homes. To date 100 homes are powered by heat generated at the plant.

Inspiring other cities to go green

Other cities are following in Stockholm’s footsteps and investing in biochar plants to create their own carbon sinks and improve inner city ecosystems.

In the US, Minneapolis is starting to use biochar to improve soil quality in its community gardens and along boulevards to stimulate tree growth.

Because of this potential to stimulate tree growth, biochar has even been involved in forest restoration studies. “Biochar improves the permeability of soil, enabling plant roots to access more nutrients, water and oxygen”, says Erik Joner, a senior scientist at the Norwegian Institute of Biochar Economy and Research.

California is interested in using biochar to prevent future wildfires.

The substance can also help restore land that has been heavily degraded by farming. “It resembles stable organic matter in soil which is declining globally because of intense agriculture where soils are tilled and not covered by vegetation,” explains Joner.

California is interested in using biochar to prevent future wildfires, according to Dahllof.

“Biochar keeps moisture in the soil and makes forests less prone to fires,” he explains.

The UK recently launched a £30 million (€35 million) research programme to assess how tree planting and other carbon removal techniques could help the country reach its 2050 net zero goal. Two of the projects will test the potential of biochar to capture carbon by burying the charcoal under former mine sites and railway embankments.

Biochar can also help the UK meet its goal of planting at least 30 million trees per year faster and sooner, says Sohi.