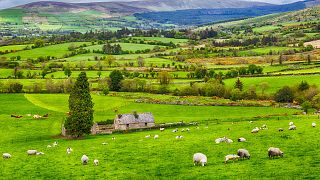 Ireland’s citizens’ assembly on biodiversity loss has called on the government to hold a referendum on protecting biodiversity.

If it goes ahead it could enshrine the protection of biodiversity in the Irish constitution. This would mean granting nature rights comparable to people.

With COP15 agreeing an historic new deal to protect nature, it’s proven timely. But how significant is this? And could other countries follow?

What is a citizens’ assembly?

This was the world’s first citizens’ assembly on biodiversity loss.

A citizens’ assembly brings together a number of members of the public to deliberate on a hugely important and polarising topic.

Like with a jury, members are selected to reflect the broader population, so there is a mix of people in terms of age, gender, disability, race, occupation and where they live.

The assembly hears evidence from experts, shares ideas for fixing the issue and votes on recommendations to issue to the government.

Citizens’ assemblies play a key role in Irish politics. In 2017 a citizens’ assembly recommended the country remove its constitutional ban on abortion, which paved the way for a referendum on the issue in 2018.

What is this citizens’ assembly discussing?

Ireland’s Citizens’ Assembly on Biodiversity Loss, comprising 100 members, is examining how the Irish government can improve its response to the challenge of biodiversity loss.

Biodiversity is the variety of life forms with which we share the world and which sustains everything that we need to survive like food, pollination, soil fertility, water purification and climate regulation.

81 per cent of Ireland’s wetland species have been lost over the past 50 years and 54 individual bird species are endangered. Approximately one third of Ireland’s 98 wild bee species were also close to extinction in 2019.

Then Taoiseach (Ireland’s Prime Minister) Micheál Martin brought a proposal for a citizens' assembly on biodiversity loss to cabinet in February.

The Assembly began deliberating in May and has had ten sessions and one field trip. It’s heard from over 80 speakers including scientists, farmers, legal experts and NGOs and had over 650 submissions including from indigenous communities in South America.

“The atmosphere is often lively, busy and engaged,” says Dr Aoibhinn Ní Shúilleabháin, an Irish academic and the assembly’s chairperson.

“The magic happens when members have heard experts’ presentations and then discuss what they have heard in tables and come back with questions.”

The Assembly will present its final report and recommendations to the Irish parliament in the new year following the completion of its final meeting and once the final report has been prepared.

What are they demanding?

The assembly has said the state has “comprehensively failed” to tackle the biodiversity crisis and wants a radical overhaul on how Ireland manages environmental concerns.

83 per cent of assembly members voted in favour of holding a referendum on changing the country’s constitution to enshrine the protection of biodiversity on 27 November.

This would mean granting nature rights comparable to people. Other countries have done this: for example New Zealand granted rights to Mount Taranaki and the Whanganui river in 2017.

However the referendum is just one among 60 recommendations that remain to be voted on at the Assembly’s final meeting in January.

“Many of those will quicken the enforcement and implementation of laws and policies, or strengthen state agencies and community groups conserving biodiversity,” says Ní Shúilleabháin.

How significant is this call for a referendum?

For Graham Smith, professor of politics at the University of Westminster, it is an important development.

“It is the first time that a constitutional protection of nature will have happened through the use of a citizens’ assembly, assuming it goes through,” he says.

If passed, a change to the constitution could enable activist groups to bring cases against polluters in the Irish courts.

Happy tears over here in Portmarnock as the @CitizAssembly on Biodiversity have voted in the majority of a whopping 83% to have a referendum on amending our Constitution to protect Biodiversity.

“It would empower organisations to challenge the government and businesses in court to uphold their responsibilities,” says Jez Hall, a director at citizens’ assembly specialists Shared Future.

“It might also make it easier to impose taxes on oil and gas companies,” he adds.

On the other hand farming, fishing and the forestry industry may have concerns about giving legal rights to the land. Some have also raised concerns that a constitutional change could constrain house building or the rollout of renewable energy.

However the mere fact the referendum is being held may be positive because it will create a public conversation on biodiversity.

“We should assess the impact of assemblies in terms of changing public discourse as well as policy changes,” Smith believes.

The assembly was also preceded by a young person’s assembly on biodiversity which fed into the adult process and gave children a voice.

“It's really important to stress how these processes open up channels for children's rights,” Hall says.

Does the Irish government have to hold a referendum?

With citizens’ assemblies there is always a risk that politicians cherry-pick recommendations which are easier to implement.

“That happened with Ireland’s climate assembly in 2017 which made 13 recommendations,” Smith says.

“Almost all of them got through except its proposal to introduce a tax on greenhouse gas emissions from agriculture which farmers mobilised against.”

But it’s difficult to water down a single constitutional proposal, he explains. “Either you are going to implement it or you are not.”

The Irish government could theoretically refuse to hold the referendum but tends to accept.

“The government accepted the proposal for referendums on abortion, same sex marriage and reduction in presidential terms,” says Smith.

The referendum’s wording will now be agreed at cabinet.

“That will need to be carefully crafted to avoid misleading the public,” explains Marcus Collier, associate professor of sustainability science at Trinity College Dublin, who presented to the assembly.

“Referendums usually take place alongside a general election. Our next election is in about two years’ time.”

Smith thinks this could be the first of many biodiversity assemblies across Europe. “Ireland is seen as a leader in this. Where it goes, other countries tend to follow.”

And Ní Shúilleabháin says there is lots of interest in the assembly.

“Since working as the chairperson, people from Holland, Chile and Germany have interviewed me on what we are doing, what is working and what is not.

“Citizens’ assemblies are an important part in strengthening people's involvement in democracies and holding them on issues like biodiversity is key. All democracies should consider it.”