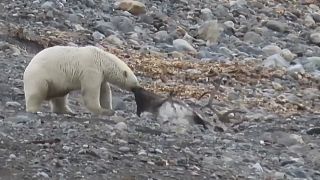 Rare footage of a polar bear chasing a reindeer into the water and killing it could be another stark indication of climate change.

After the female polar bear drowns the male victim, she drags it ashore in a move that indicates a change of diet for bears in Norway's Svalbard archipelago.

The video was taken by a research team from a nearby Polish scientific station who watched it happen and caught the spectacle on camera for the first time.

Retreating sea ice leaves bears stranded on land for longer periods. So, with fewer seals and a steadily rising reindeer population in Svalbard - it appears polar bears are being forced to change their eating habits.

The incident is being seen as one of a series of observations that suggest polar bears are increasingly preying on land-based animals to make up for their limited access to their normal diet.

In Svalbard, just over 1,000 kilometres from the North Pole and where signposts warn of the danger of polar bears, some 300 sedentary bears live alongside around 20,000 reindeer.

There are now indications that polar bears have been hunting reindeer more frequently in recent decades.

The facts that bears are stranded on land and that the number of reindeer has been steadily rising on Svalbard due to a 1925 hunting ban have resulted in the unusual phenomenon.

Eating reindeer has become a matter of both necessity and opportunity for polar bears.

But it is largely being seen as yet further evidence of a changing climate.

COP26 takeaways: Some progress in climate pact but much more needed