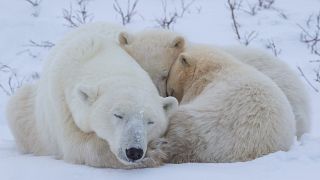 27 February is International Polar Bear Day, created to draw attention to the many threats the iconic species is facing.

The event was created by NGO Polar Bears International in 2011, to raise awareness of female polar bears and their cubs, which are currently denning across the Arctic.

The polar bear is labelled vulnerable by the International Union for Conservation of Nature (IUCN)'s red list, which estimated that there are 20-25,000 bears in 5 countries. It is very hard to get exact data about the population because of the severity of the circumstances.

Protecting the most vulnerable of them is crucial in order to secure the future of the species, which is already threatened by global warming and habitat loss. The disappearing sea ice means that the bears' hunting and denning territory is rapidly disappearing.

The latest study published in Nature Climate Change in 2020 projects that if there is no change in greenhouse gas emission levels, all but a few populations will be wiped out by the year 2100.

Keeping mother and cubs safe, while also addressing a warming climate, is a critical part of polar bear conservation. A stable, uninterrupted denning process is essential to the survival of polar bears.

Right now, scientists from Polar Bears International and partner organisations are in Svalbard, Norway, conducting research and working on locating and monitoring dens in order to protect them from human activities.

"It can really disturb the mothers and if they are disturbed too much, or at the wrong period of time the mum may actually leave the den and leave the small cubs behind," says scientist at Polar Bears International, Dr. Thea Bechshoft.

"Studies have shown that polar bear cub mortality can be incredibly high, upwards of 50 to 75 per cent."

Geopolitical tensions could have an impact on global warming

The ongoing war in Ukraine could have a huge impact on worldwide efforts to mitigate climate change and global warming, warns the scientist.

"This war may create a shift in energy use that could either go towards more fossil fuels or it could go towards a quicker, greener transition. Time will tell, " says Bechshoft.

Watch the video to learn more about saving polar bears.