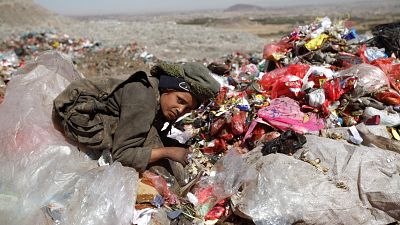 A boy collects recyclable items at a rubbish dump site on the outskirts of Sanaa, Yemen.   -   Copyright  Mohamed Al-Sayaghi/REUTERS
By Doloresz Katanich  with Reuters  •  Updated: 10/07/2022

Tonnes of dangerous untreated medical waste, just outside Yemen's largest city poses a threat to the environment and water supplies.

At a landfill site near the city of Sanaa, a truck unloads bags of colourful trash into a seemingly endless sea of waste covering the area.

The al-Azraqain landfill receives 2,000 tonnes of waste a day, including dangerous untreated medical waste generated by hospitals in Sanaa. As the waste builds up, it leaks toxic chemicals down into the ground.

"We have no solution but to bury the medical waste with the garbage. It is mixed with garbage and buried," says Bahauddin al-Haj, data manager at al-Azraqai landfill site.

Though not a paragon of waste management before the war, Sanaa was at least able to separate the most dangerous materials from general waste.

Nearby there used to be a medical waste processing facility which housed an incinerator. Unfortunately, it was destroyed in a bombing in 2015.

Medical waste is hazardous material that may be infectious, toxic or radioactive.

The pools of contaminated waste on the landfill release pathogens and toxic pollutants into the environment and those leak into the groundwater.

Groundwater is a common source of drinking water and water for cleaning, agriculture and animals.

If groundwater is contaminated, it can cause a variety of diseases and illnesses including cancers, birth defects, immunological disorders and many other diseases.

So even when the war is over in Yemen, its effects could last for decades.

Local administrators say they are looking for support from NGOs to rebuild the incineration facility.

"Due to the high cost of establishing such a project, we have coordinated with the Supreme Council (for the Coordination of Humanitarian Affairs) as well as with various organisations,” says Head of the General Directorate of the Cleaning Department Ibrahim Al-Surabi.

“And God willing at the beginning of next year, we will discuss the rebuilding of this strategic project. “

Watch the video above to learn more about this story.

This solar-powered skylight can turn seawater into drinking water