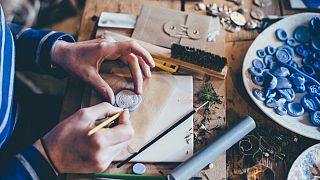 Conscious, thoughtful, and kindly-produced – you might be interested in making environmentally- and socially-conscious shopping decisions, but many people are confused by the marketing terms that are commonly used to describe these products. Here, we outline the difference between fairtrade, ethical and handmade.

In the 1980s, campaigners and rights activists worked to create a legal and institutional framework to ensure producers in developing countries were able to achieve better trading conditions, including “better prices, decent working conditions, local sustainability, and fair terms of trade for farmers and workers in the developing world,” according to The Fairtrade Foundation, a UK-based fairtrade charity.

“By requiring companies to pay sustainable prices (which must never fall lower than the market price), Fairtrade addresses the injustices of conventional trade, which traditionally discriminates against the poorest, weakest producers. It enables them to improve their position and have more control over their lives,” writes the Foundation.

Originally focused on the rights of coffee, cocoa and tea producers, the fair trade movement today has expanded to include traders from across multiple industries, from textiles to food. The precisely defined ‘Fairtrade’ designation – which can be found on products as a sticker or badge – is an official certification developed by FINE, an informal association of four international fair trade networks: Fairtrade Labelling Organizations International,World Fair Trade Organization (WFTO), Network of European Worldshops and European Fair Trade Association (EFTA).

There has been some criticism levelled against the term, including claims that producer benefits are minimal because of an oversupply of certification and because only a fraction of produce classified as fair trade is actually sold on fair trade markets. Accusations that the implementation of certain fair trade standards can cause greater inequalities in some markets where rigid rules are inappropriate for the specific market have also been levied. Further, the movement has been criticised regarding the enforcement of its standards.

Still, the designation remains popular in Europe and the UK, and globally six out of ten consumers say they have seen the Fairtrade mark, while nearly nine in ten say they trust it.

World Fair Trade Day, celebrated annually in the second week of May, is a global event drawing attention to the Fair Trade movement. Started by the the World Fair Trade Organization (WFTO) in 2004, the worldwide festival of events celebrate Fair Trade as a tangible contribution to the fight against poverty and exploitation, climate change and the economic crisis that has the greatest impact on the world’s most vulnerable populations.

What does ethical mean?

While Fair trade is an official certification awarded by governing bodies, ‘ethical’ is an unregulated term that is primarily used in relation to the working conditions and pay of a product’s producers.

The term is not certified, meaning producers can independently choose to apply or award the term to their products. Some producers who chose to label their products as ‘ethically-made’ will include information about what the designation means to them, but the term can refer to everything from living wages to clean and safe factory conditions. If you’re interested in buying a product that’s marketed as ethical, consider inquiring about what the designation means to ensure you know what you’re paying for.

While ‘handmade’ conjures visions of highly-trained, independent artisans working in workshops, the term simply refers to any product that is created without the industrial process of production. Also called ‘artisan’, handmade products are usually created with minimal automation by skilled workers, often in developing countries.

Just because something is handmade doesn’t mean it’s sustainable, ethical or Fairtrade. While you can usually assume that handmade products aren’t produced in highly mechanised factories, the origins of the product - such as its wood or textiles that are used to make it - and its supply chain aren’t necessarily any more ethical or transparent.

A handmade wooden bowl, for example, could still be created from non-sustainably harvested wood that’s been sprayed with toxic pesticides. Further, handmade doesn’t ensure that the workers who create the product are being paid fair or liveable wages. Just as with products marketed as ‘ethical’, its best to check with producers if you’re committed to buying something that’s good for the environment and producers.