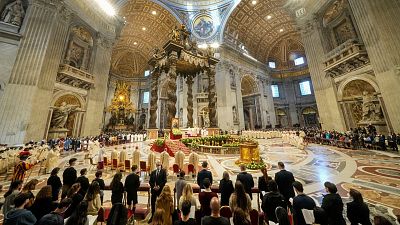 Pope Francis has praised young people for their efforts to protect the environment, telling them to "be the critical conscience of society."

Francis celebrated Mass in the Vatican's St. Peter's Basilica, filled with hundreds of young people on Sunday. The service was to mark a church day focused on youth in dioceses worldwide.

"You have been entrusted with an exciting but also challenging task," the pontiff said, "to stand tall while everything around us seems to be collapsing."

Francis expressed thanks "for all those times when you cultivate the dream of fraternity, work to heal the wounds of God's creation, fight to ensure respect for the dignity of the vulnerable and spread the spirit of solidarity and sharing."

You have been entrusted with an exciting but also challenging task, to stand tall while everything around us seems to be collapsing.

He discussed the fact that young people are calling out the destruction of our natural environment, saying "we need this".

The Pope added that in a world that "thinks only of present gain, that tends to stifle grand ideals, you have not lost the ability to dream."

"Be free and authentic, be the critical conscience of society," Francis concluded.

Social justice and care of the climate have been key messages of his papacy thus far.

The pope is expected to meet with young people from all over the world at the Catholic church's jamboree in Lisbon, Portugal, in August 2023.