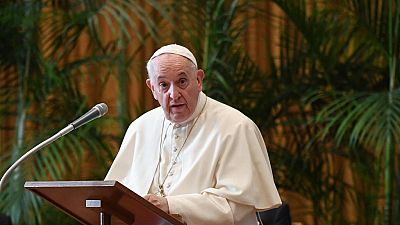 Pope Francis and dozens of religious leaders have signed a joint appeal to governments to commit to ambitious targets at the upcoming UN climate conference in Glasgow.

The religious leaders also promised to do their own part to lead their faithful towards more sustainable behaviour, as "care for the environment is a moral imperative to preserve God's creation for future generations".

"We have inherited a garden; we must not leave a desert to our children," said the appeal, which was signed at a formal ceremony in the Apostolic Palace before being handed over to the COP26 President, Alok Sharma.

The "Faith and Science: towards COP26" meeting brought together Christian leaders including the Archbishop of Canterbury, the Orthodox Ecumenical Patriarch, as well as representatives of Islam, Judaism, Hinduism, Sikhism, Buddhism, Confucianism, Taoism, Zoroastrianism, and Jainism.

Experts say the appeal is a make-or-break chance to curb greenhouse gas emissions.

"Allow me to offer three concepts for reflection on this shared endeavour: Openness to interdependence and sharing, the driving force of love and the call to respect," declared Pope Francis.

The meeting follows a youth climate summit in Milan last week, and many of the faith leaders are now insisting that faith and science must listen to each other to save the planet.

"We need our youth to continue their call for change with the passion that we have heard today. We need the scientists with their academic authority to amplify further their voices in the public debate. And [we need] faith leaders to use their moral leadership to make the case for action," said Sharma.

In their appeal, the church leaders begged political leaders to adopt measures to limit temperature rise and for countries that are most responsible for greenhouse gas emissions to provide financial support to the most vulnerable communities.

Pope Francis is widely expected to attend the COP26 on October 31, a summit aiming at securing more ambitious commitment to limit global warming to well below 2 degrees Celsius, with a goal of keeping it to 1.5 degrees Celsius compared to pre-industrial levels.

COP26 is just around the corner. Here's what needs to happen | View