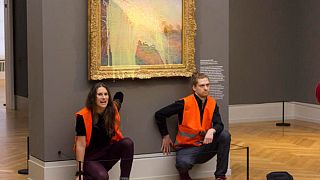 German climate protesters threw mashed potatoes at a Claude Monet painting at Potsdam’s Barberini Museum in the state of Brandenburg, about 20 miles southeast of Berlin.

They approached Monet’s Les Meules and threw the potato over the painting and its gold frame.

The protesters wore orange high-vis vests and glued themselves to the wall below the painting.

"Does it take mashed potato on a painting to make you listen?" said one of the activists. “This painting is not going to be worth anything if we have to fight over food. When will you finally start to listen?"

The painting was unharmed, the museum said, and authorities stated they are investigating the protesters, whom police did not name, for property damage and trespassing.

Ortrud Westheider, the museum's director, said in a statement that while she empathized with the protesters' concerns, "I am shocked by the means with which they are trying to lend weight to their demands."

"It is in the works of the Impressionists that we see the intense artistic engagement with nature," Westheider added.

In a statement on Twitter, the group said: “If it takes a painting with #MashedPotatoes or #TomatoSoup thrown at it to make society remember that the fossil fuel course is killing us all: Then we’ll give you #MashedPotatoes on a painting!”

Four people were involved in the stunt, according to German news agency dpa.

The activists involved belong to the group Letzte Generation (Last Generation), which has called on the German government to take drastic action to protect the climate and stop using fossil fuels.

The painting, part of Monet's celebrated Haystacks series, was sold at auction three years ago for $110m.

The Barberini Museum said that because it was enclosed in glass, the activists did not cause any damage.

The painting is the latest artwork in a museum to be targeted by climate activists. The UK group Just Stop Oil threw tomato soup at Vincent van Gogh’s Sunflowers in London’s National Gallery earlier this month.That painting was also behind protective glass and unharmed, according to the museum.

Just Stop Oil activists also glued themselves to the frame of an early copy of Leonardo da Vinci’s The Last Supper at London’s Royal Academy of Arts, and to John Constable’s The Hay Wain in the National Gallery.

Just Stop Oil: Who are the protesters gluing themselves to art?