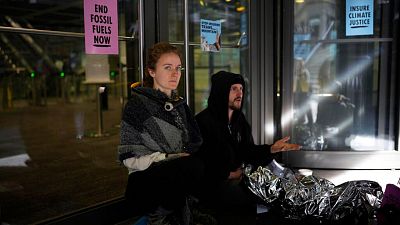 An Extinction Rebellion climate change protester sits with a lock around her neck attached to a bar on a door.   -   Copyright  AP Photo/Matt Dunham
By Rosie Frost  •  Updated: 10/05/2022

Under the new laws, it will be illegal for activists to lock or glue themselves to buildings with those that do facing a maximum penalty of six months in prison and an unlimited fine.

Actions that “interfere with” national infrastructures, like airports, roads or printing presses, will also be against the law carrying a maximum prison sentence of 12 months and an unlimited fine.

These new public order measures are being pushed through as part of 38 new bills in the Queen’s Speech - which marks the official state opening of the UK Parliament. For the first time in 59 years, the agenda-setting speech was not read by the monarch but by her son Prince Charles.

“Climate change” was not mentioned once in the speech, where the government outlines its legislative priorities for the coming months. The content is written by ministers under PM Boris Johnson and approved by the Cabinet.

Where did the new public order laws come from?

The changes to the law were originally proposed last year as part of the Police, Crime, Sentencing and Courts Bill. They were stripped out of the legislation by the House of Lords in January which said the measures were “draconian and anti-democratic, reminiscent of Cold War eastern bloc police states.”

Now Home Secretary, Priti Patel, has drawn up a separate Public Order Bill as part of the Queen’s Speech.

“The law-abiding, responsible majority have had enough of anti-social, disruptive protests carried out by a self-indulgent minority who seem to revel in causing mayhem and misery for the rest of us,” Patel claims.

“The public order bill will give the police the powers they need to clamp down on this outrageous behaviour and ensure the British public can go about their lives without disruption.”

Despite being previously rejected, the new plan to introduce the measures relies on the government’s majority in the House of Commons to force through a new law.

Civil liberty groups previously expressed deep concern over measures to limit protestors when they were first proposed, saying they infringed on the right to protest.

“Earlier this year the Government tried to ban protest. Parliament said no,” Martha Spurrier, director of the campaign group Liberty said on Twitter. She accused the government of “bully boy tactics” in their current attempt to “force this law through.”

“We will be working cross party again to defeat. Our right to peaceful protest should be protected, not attacked.”