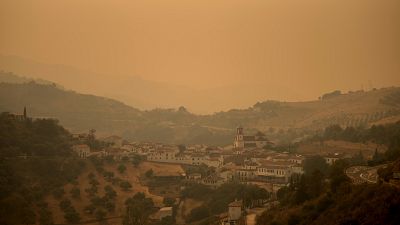 Wildfires made the sky orange in Spain, earlier this year.   -   Copyright  JORGE GUERRERO/AFP or licensors
By Efi Koutsokosta  •  Updated: 02/11/2021

Last summer was dramatic in terms of extreme heatwaves and unprecedented wildfires. And experts are worried that we’ve reached a turning point.

"What is very alarming to me is the development of the heat extremes, so we see droughts and fires,” says Professor Jos Lelieveld of the Max Planck Institute.

“Of course, this is a natural thing, but it's getting worse and worse. But what worries me the most is the development of extreme heat, because, you know, at some point, it will get to the point where humans cannot survive, at least not without air conditioning."

North Africa, the Middle East and the Eastern Mediterranean are the regions most at risk.

"In terms of heat, it's clearly the Middle East and the Eastern Mediterranean and North Africa because it's already very hot there,” says Professor Lelieveld.

"So even though you know the winters may be less harsh than in the past, which could maybe be seen as an advantage, there are other things that will be affecting these countries".

Large-scale circulation connecting to Africa, and to the monsoon in Asia, make this a region that is heating up very quickly.

With changes irreversible, the only strategy that remains is containment.

"It's not really reversible, so you cannot change it back, negative climate change - that would require that the amount of carbon dioxide and other greenhouse gases in the atmosphere is really decreasing,” says Professor Lelieveld.

City heat: How the UN plans to cool down our rapidly warming cities