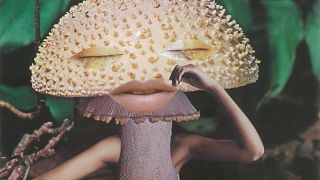 “Mushrooms are nature’s computers, communicating through their hyphae like our neural network.”

Spelt out in big letters and written across the wall, this quote is what greets you at London’s new psychedelic exhibition – a veritable celebration of the mushroom. Mushrooms: The art, design and future of fungi has just opened its doors to the public at Somerset House, and already, I notice the array of visitors is eclectic. A group of women in their early twenties amble in together, all with piercings and/or multi-coloured hair, donning curious looks at the art whilst leaning in to inspect the captions.

Middle-aged couples in fraying jumpers and trainers share the space, grinning at each other with knowing looks as they ponder the installations, no doubt nostalgic for their hippie youths.

Three TV screens stand facing each other in the second viewing gallery, depicting several figures dancing to techno music in a fluorescent green room. We are invited to stand between each of the screens, watching as animated mushrooms grow up the sides of the walls and the figures dance somewhat wildly. On a nearby wall, disorientated collages of religious figures interspersed with fungi are on display– artist Lara Ögel seeks to represent the sense of spiritual liberation brought about by the psychedelic experience.

Collage seems to be a popular medium for mushroom art, as it’s impossible to miss Seana Gavin’s bright, anthropomorphic cut-and-paste creations, which make the viewer feel as if they have entered a hallucination themselves.

Of course, the exhibit is not only about psilocybin (magic) mushrooms. Humanity’s long affinity with fungi goes back thousands of years. Today, scientists understand that, as an organism, fungi is what underpins life on earth and is the basis for all ecosystems.

“90% of living plant species depend on fungi to access essential nutrients through their roots.”

In the world of art, we have clearly understood the role mushrooms play in preserving nature for generations. A selection of watercolour paintings by Beatrix Potter is on display; I learn that she produced over 300 paintings of mushrooms in the late 1800s, as a self-taught mycologist. It was this fungal fascination that led her to depict landscapes so vividly in her famous works of Peter Rabbit and Jemima Puddle Duck.

Now in the twenty-first century, what can we learn from mushrooms? Fungi is already used in so many different forms as a productive material. For one, mycelium has been hailed fashion’s new future fabric, as Kristel Peters demonstrates in her display of high heeled shoes in the final gallery.

Focusing on the link between bio-technology and fashion, she makes shoe prototypes out of the fungus, as it has little to no environmental impact as a material. Equally, mushrooms now contribute to fields of architecture, design and even medicine.

It begs the question, could fungi be instrumental in combatting climate change? As the exhibit comes to a close, there is a suggestion that the mushroom could now become a “figure of resilience and new life” amidst a moment of deep ecological crisis.

I ask curator Francesca Gavin what she thinks. “I think that mushrooms demonstrate how nature is able to heal itself, and are a lot more intelligent than we think. We need to live symbiotically with nature and fungi demonstrate that.”

The mighty mushroom has the power to prop up ecosystems, sustain multiple industries and, if we dare, maybe even enhance our understanding of the natural world.