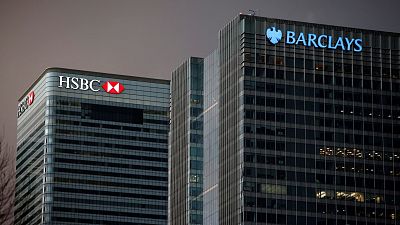 HSBC and Barclays buildings.   -   Copyright  TOLGA AKMEN/AFP or licensors
The opinions expressed in this article are those of the author and do not represent in any way the editorial position of Euronews.
By Jo Blackman  •  Updated: 28/10/2021

**Jo Blackman is Head of Forests Policy and Advocacy at Global Witness. Here she discusses the role banks play in the climate crisis.
**

As COP26 approaches, banks are keen to position themselves as a key part of the solution to the climate crisis.

Many have committed to aligning their investments with the Paris Agreement and putting in place voluntary environmental, anti-deforestation and human rights policies.

So far, so good - at least - if you only look at their PR materials and public pledges.

However, our latest investigation reveals for the first time how the financial decisions of global banks contradict their public commitments. This reveals how they amass millions from bankrolling global deforestation, leaving affected communities around the world high and dry.

How banks profit from deforestation

Our findings suggest banks and investors headquartered in the UK, EU, US and China made $1.74 billion (€1.49 billion) in income from huge investments in agribusiness firms - linked to the destruction of climate-critical forests - in the five years following the Paris Agreement.

The banks raking in these revenues include big global names such as HSBC, JP Morgan, Deutsche Bank, BNP Paribas, Rabobank and Bank of China.

In total, financial institutions in the UK, EU, US and China ploughed $157 billion (€134 billion) between 2016 and 2020 into companies allegedly responsible for the destruction of vital ecosystems. Including the Brazilian Amazon, Cerrado, and the tropical forests of Gabon, Cameroon and Indonesia.

Vital ecosystems are being destroyed

These forests act as vital carbon sinks and emit huge amounts of CO2 when they are destroyed. If deforestation were a country, it would rank third in CO2 emissions, after China and the US.

Forests also contain 80 per cent of the world’s terrestrial biodiversity, and are home to Indigenous peoples and local communities, who have safeguarded them for generations. These communities have been at the sharp end of land-grabbing, violence and other human rights abuses linked to the destructive agribusinesses these banks are funding.

Relying on the voluntary policies of banks has failed to rein in their financing of deforestation and human rights abuses. In the absence of external accountability mechanisms or government legislation, financiers face no consequences for striking deals with destructive companies over and over again.

HSBC is the UK’s largest financier of agribusiness

Take HSBC, one of the world’s biggest banks. The company’s CEO Noel Quinn said in a November 2020 interview that HSBC aims to play a leading role in supporting the global transition to a global net-zero carbon economy, stating that doing the right thing by the environment is “morally the right thing to do, but I see it also as a commercial opportunity.”

Yet, when you look at our findings on HSBC’s funding of deforestation, Quinn’s words appear to be mere lip service.

Our analysis shows HSBC is the UK’s largest financier of destructive agribusiness and the second largest privately owned bank in our global dataset after JPMorgan. It provided £5.25 billion of financing to some of the world’s worst deforesters between 2016 and 2020 - and likely pocketed more than £27.8 million (€32.8 million) in revenues along the way.

HSBC received $15.5 million (€13.3 million) of that total income in the years following its public ‘no deforestation’ commitment in 2017.

The glaring gap between what banks say and what they actually do highlights the industry’s rampant hypocrisy.

These initiatives will fail to halt the financing of deforestation, as they still allow banks to keep all the profits they make from deals with deforesters and do not hold them accountable for environmental harms or human rights abuses.

While the finance industry will continue to distract and defer with their empty commitments and false solutions, there is a growing movement pushing for banking accountability. This includes increasing pressure for banks to be regulated under new national laws on deforestation and supply chains in the UK, EU and US.

At the same time, affected communities are pushing new precedents for remedy and redress under international and national laws. For example, last year saw the first case of a financial institution having to return money made from a problematic deal. When the Australian bank ANZ was forced to hand land-grabbing victims in Cambodia the profits it had made from an estimated $40 million (€34 million) loan to a sugar company nine years earlier.

As governments, shareholders and the public increasingly see money made on the back of environmental and human rights abuses as illegitimate, deforestation-linked profits could become major legal and financial liabilities for banks.

However, we can’t wait for banks to respond to this mounting pressure. As our findings make clear, they will not act unless there is an immediate cost. That’s why governments in major financial centres including the UK, EU, US and China, need to make environmental destruction a liability for banks.

To achieve this, we need strong laws in these jurisdictions, which make it illegal for the finance industry to profit from deforestation and associated human rights abuses. This will also help create a level playing field for the financial institutions that are genuinely committed to making more responsible investments.

As the world gears up for COP26, world leaders must not fall for the financial sector’s hype, and must take bold action to protect the world’s forests from destructive investments. Our global climate depends on it.