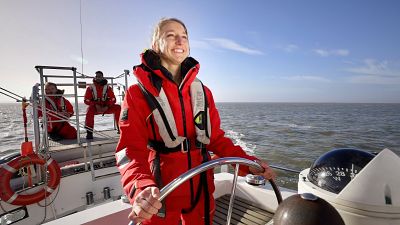 Ocean travels to Malta and the Netherlands to meet the enthusiasts attempting to raise public awareness about the health of our seas and the marine environment.

...this is the perfect way to educate people.

Every year, millions of beach lovers visit Malta. But one group of snorkelers have come for more than just fun. They are here for a free guided tour by Malta’s National Aquarium to learn more about local marine life and its importance for humanity.

"This is the perfect way to educate people. I think kids enjoy it, people my age enjoy it, there was even some people who are a little bit older than me, you know, and it seems like an inclusive event to me, thumbs up!" said one participant.

Such initiatives aim to improve public awareness about the ocean and the marine environment.

Malta's Ocean Ambassador Alan Deidun says most people are emotionally detached from such issues, but hopes action like this can help bridge the gap.

"As we know, Europe has a blue growth strategy that we need to generate more economic activity from the sea. But we must make sure that that is done sustainably," Deidun explains.

"And one way of doing that is to have more ocean literacy, not just for Joe citizen, for the man in the street, but also for policymakers, because you would be amazed that some policymakers actually are very ocean illiterate."

It connects a diverse range of organisations, projects and people and also develops educational programmes to help improve the public's knowledge and create debate about what’s happening to our seas.

"The key lesson is to involve the people, make them understand at an early stage what the ocean means for our livelihoods and our future," insists Aaron Farrugia, Malta's Minister for the Environment, Climate Change and Planning.

"How can we not be knowledgeable enough and not, you know, committed enough to the planet's biggest asset on which we all depend - children, students, media people, politicians, policymakers, everyone?"

You might love it, you might find it amazing — if you don't fight for it, it's all going to be over very, very soon.

Targeted local events known as Coast Days are seen as one way to engage the public - especially children, keen to learn about things like the marine food chain while playing a game.

At a European level, EU4Ocean promotes ocean literacy in schools, supports youth projects and engages the public with the #MakeEUBlue campaign.

"The sea is in trouble, and unfortunately, people are not aware. One of the main messages that, in my opinion, aquariums, zoos in general should be spreading is exactly ocean literacy. You can have all of the beauty that there is, you can see how amazing all of these animals are. But at the same time, there's something that we need to do about it, especially for the younger generations. You might love it, you might find it amazing — if you don't fight for it, it's all going to be over very, very soon," explains Thais Amaral, an Education Officer at Malta National Aquarium.

Training the next generation

From Malta to the Netherlands, and a pioneering social enterprise called the Sea Ranger Service is helping motivated young people to embark on a maritime career.

Founded in 2016 by Dutch conservationist Wietse Van Der Werf, it offers them the chance to get a full year’s sailing experience - while also earning a salary.

"One of the things that the maritime industry really struggles with is to attract young people, young talent. So how do we inspire and motivate young people to choose a maritime career? Well, one of the ways is by them starting as a Sea Ranger," explains Van Der Werf.

...my friend told me about the Sea Ranger service and I was sold!

All aged under 30, the Sea Rangers spend roughly half of every month at sea. During the year, they learn theory - such as marine cartography, sailing techniques and engine operation - while also working on environmental assignments at sea.

"They work on this ship that you see behind me, which is a special sailing ship, so it's a very clean, very emission-free way to operate. And they carry out all types of assignments to do with research, to do with the management and the restoration of nature at sea," Van Der Werf says.

Most of the new recruits have no sailing background and learn the ropes with the help of their more experienced teammates and seasoned professionals.

"It all started with my love for the ocean. I love scuba diving. And I started working as a lifeguard — and my friend told me about the Sea Ranger service and I was sold!.. The team is really special, already feels like family a little bit. And I'm learning a lot, because sailing was completely new for me," says Sea Ranger Nina Hubers.

With only a few places available every year, the competition to become a Sea Ranger can be stiff, while the candidates who do take the plunge are put through a tough boot camp.

People from a number of countries... are saying, hey, there's a model that can potentially make a difference, make impact here.

The company says it has built a sustainable business model that reduces youth unemployment while helping the environment. It now has plans to grow internationally through a franchising model, with the ambition to train 20,000 young people for jobs in the maritime sector by 2040.

"People from a number of countries, most notably France and Spain and Greece around the Mediterranean, but also Estonia, Finland, Poland around the Baltic Sea, are saying, hey, there's a model that can potentially make a difference, make impact here. So we're now in advanced talks with a number of these people to see if we can implement the model there," Van Der Werf says.

From climate change and pollution to resource exploitation - our oceans face multiple challenges. But the hope is, the more that people know about these problems, the more they will take matters into their own hands to help turn the tide.

'Every second breath you take comes from the ocean,' says expert