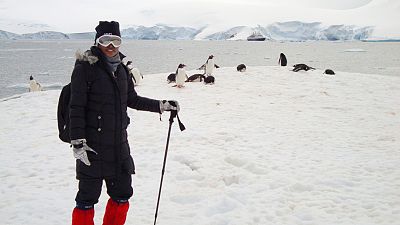 Earth’s poles are warming faster than the rest of the planet and ice is disappearing at a dramatic rate.

Beyond losing the unique landscapes of the Antarctic and Arctic forever, there are cascading effects: from ocean acidification and extreme weather to food insecurity.

Youth-led environmental network, the Arctic Angels, is a group of 28 young women committed to a variety of environmental causes. Together they believe that this ‘ice crisis’ is the most pressing issue we face. Put simply, they say, “you can’t plant ice”.

Later this year, the Angels are hoping to join the 2041 Climate Force Antarctica Expedition. There they will explore the continent's icy landscapes, hike alongside penguin colonies and travel through the dramatic Neptune’s Bellows.

But there’s more on the table than simply the trip of any environmentalist’s dreams.

After witnessing the melting of the Polar ice first-hand, the Angels want to communicate their findings with world leaders at COP26 from onboard the expedition ship. The idea offers an opportunity to share the impacts of the climate crisis from the front lines.

Who are the Artic Angels?

The Angels come from countries all over the world including the UK, Brazil, the USA and Greenland. Members of the group are environmental champions for everything, from forest conservation to the effects of deep-sea mining.

Angels member Divya Nawale has already made the trip from Southern India to Antarctica twice before. She saw snow for the first time in her life and the melting ice caps helped her to realise that she had an opportunity to effect change.

“I would never have imagined that a girl like me from India would have the opportunity to use my voice for the Polar ice crisis,” she says.

At just 14, Astrid Tuuli Grace Determan is one of the youngest members of the Angels but she is already no stranger to using her voice for environmental issues. Aged five, she founded EPIC-Animals, an organisation aimed at empowering young people to save endangered animals.

Before she was 10, she had already travelled nearly 200km north of the Arctic Circle to the Gwich’in Nation to campaign for the protection of caribou.

“The Gwich’in depend on nature for their physical survival, but it is so much more than that,” Determan says.

“What my heart saw in the Arctic, through my Gwich’in friends, I will never forget. That has guided what I do now and will do with the rest of my life.”

Her compassion caught the eye of Global Choices co-founder, Inge Relph, who invited Determan to become one of the first Arctic Angels.

“We are facing an ice crisis as the Polar ice melts on our watch. Irrecoverable in our lifetime, loss of the Earth’s ice shields has profound implications globally,” she says.

Together with the rest of this diverse group and supported by Global Choices, this intergenerational climate network is empowering young people to push for the protection of polar ice.

Each of the Angels’ campaigns is inspired by their own experiences of the climate process from rising sea levels to desertification. United behind raising awareness of the ice crisis, they all support each other’s initiatives.

Set up by Global Choices in 2019, Determan describes them as “part incubator, part family”. Open to those under the age of 35, they aim to lead by example to foster community and collaboration within the environmental movement.

"We founded a female-led and intergenerational environmental organisation called Global Choices, because despite lots of wonderful climate action, there is little prioritisation,” says Relph.

“Our work is science-based, but head is combined with heart and pragmatic action. Collaboration is core, as is a deep feminine consciousness where self interest gets set aside for the global common good.”

Our work is science-based, but head is combined with heart and pragmatic action.

Through mentoring, this is an ethic that the organisation is hoping to pass on to the young people that they collaborate with.

“This is something we try to embed in our operations and instil in our network of young climate activists, the Arctic Angels," Relph adds.

Emma Grace Wilkinson, Angels’ coordinator, explains that international collaboration is what makes their voices so powerful.

“When a young woman thousands of miles from the Arctic who has never seen snow or ice is calling on world leaders to protect the Polar ice caps, in order to protect her own community, it captures attention.”