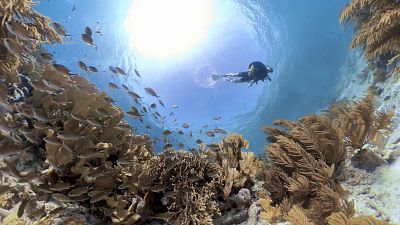 Coral reefs might only cover a tiny fraction of the ocean floor, but they are home to around a quarter of all marine species. Many though are dying due to warming oceans and pollution. In this episode, Ocean looks at what's been done to not only preserve reefs but also bring them back to life.

Bonaire is a Dutch island in the Caribbean Sea famous for its extraordinarily rich coral reef. A true wonder of the ocean, reefs provide income and food to hundreds of thousands of people. They also capture carbon dioxide and protect tropical shorelines from storms. Bonaire designated its coastal waters a national marine park in 1979. All marine activity is strictly regulated by rangers who patrol to enforce the rules.

"Everything from the high water line to 60 metres deep is the Bonaire National Marine Park. We have one of the best protected reefs in the Caribbean area. Anywhere you go in the water, you are guaranteed to see some amazing biodiversity," explains Roxanne-Liana Francisca, a wildlife and marine biologist at STINAPA Bonaire.

'We have lost already almost half of our reefs''

The rangers use sensors to check the temperature of the water at various depths: warming can cause bleaching, either turning the coral white or in some cases killing it. Wastewater, or the ingredients found in sunscreen also pose a threat, as does overfishing, which can lead to the spread of harmful algae and worms. For those reasons, biologists monitor the reefs for signs of damage.

"People have been looking at our reefs in one way or another for the past 40 years. Even though our reefs are still in pretty good shape, we have lost already almost half of our reefs, if we look at the five and 10 metre depths. Last year we had a really big bleaching event where about 60 percent of our reefs had some degree of bleaching. Luckily for us, most of the corals did recover," Francisca says.

The health of the reef is deeply connected to Bonaire’s inland ecosystem — with its rich wetlands, mangroves and bird habitats. Over the past decade, Bonaire’s population has doubled. That has led to increasing amounts of waste and pollution - for instance from deforestation - ending up in the ocean. Such threats to the coral are not unique to Bonaire.

Recent research shows that over the past decade, our planet has lost 14% of its coral reefs. If this decline continues, coral may face complete extinction — with disastrous consequences both for marine life and for coastal economies.

Vital for the planet and the economy

Every year, Caribbean reefs generate hundreds of millions of euros in income for the tourism sector. Bonaire, which brands itself a "divers' paradise", is a magnet for divers and snorkelers all year round.

A number of local diving centres support "Reef Renewal Bonaire" - a small non-profit organisation led by Italian marine and environmental researcher Francesca Virdis. Ten years ago, she set up the foundation in a bid to save the island’s disappearing reefs.

One shallow area we visit, used to be a thriving reef just a few decades ago. Now it is covered with dead coral debris.

"Unfortunately, coral reefs are dying all around the world. And although in Bonaire, we can still say that we have sort of one of the best Caribbean reefs, it's not as pristine as it was," explains Francesca.

One way to give coral a fighting chance is so-called “coral gardening”: around 15,000 corals of several different species are grown in local underwater nurseries. Reproduction is encouraged by cutting the coral in half - a technique known as fragmenting.

"Reef Renewal Bonaire" has only a few members of staff. The non-profit organisation relies mostly on private donations and volunteer support, though some of its projects do get public funding, including from the EU.

"We are outplanting more than seven and a half thousand pieces of coral this year over the 10 restoration sites we have... On every tree, in every nursery we have here, all the corals are from the same genotype. And this way, when they are put together or they touch together, they will grow together and fuse together," says Reef Renewal's restoration technician Ernst Noyons.

Genetic similarities within the coral, however, can make the reef vulnerable. A new restoration technique can eliminate this by using the coral’s reproductive cells instead of fragmenting.

"We use the sexual reproduction of corals to produce new, genetically unique individuals. And it's very important because the higher is the genetic diversity on the reef, the more resilient is the reef itself," Francesca says.

The coral releases reproductive cells into the water during what’s known as “mass spawning events”. Researchers collect these, fertilising them in the lab, to produce larvae that then settles on star-shaped ceramic plates that are placed in floating pools at sea.

"We make sure that we have a lot of larvae settle on this stars, and then we bring the stars, in order of thousands, and we outplant them back to the reef - and then we monitor the growth of the little settlement on it." explains Virdis.

Klein Bonaire is a small protected island off Bonaire's west coast and home to a vast reef of staghorn corals. Two thousand square meters in size, this is just one of Reef Renewal’s many plantations. The team stress everyone can play their part — be it, using eco-friendly sunscreens, making a donation, or even by becoming a coral restoration volunteer themselves. Divers can take a two-day training course to learn the basics on how to maintain a coral nursery.

"Almost 80 percent of the dive shops in Bonaire — they're part of the programme now, and the people are super, super enthusiastic," Reef Renewal's diving instructor Guillermo Alcorta tells us.

A marine biologist from Belgium taking part in the training tells us: "I think reef preservation projects are vitally important! I really wanted to learn about it in much more depth so I could play a role."

Another marine biologist from the UK, who is also taking part in the training, says: "Sometimes it seems very far away, it's under the water — how can you help? But this is giving people a hands on opportunity to make a difference.''

This work by enthusiasts can make a huge difference in the preservation of local reefs. But the long-term survival of coral will depend on our ability to reverse both global warming and eliminate other threats to marine life in the decades to come.