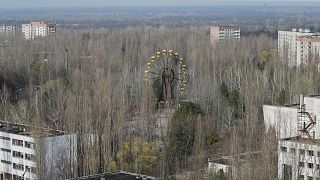 More than 10,000 hectares of forest in the Chernobyl Exclusion Zone are on fire, a Ukrainian official has warned.

“Control and suppression of fires is impossible due to the capture of the Exclusion Zone by Russian troops,” Lyudmila Denisova, commissioner of the Verkhovna Rada of Ukraine for Human Rights said.

She added in a Facebook post on Saturday that radioactive air pollution has been released due to the burning, warning that it could be carried significant distances on the wind.

“This threatens radiation to Ukraine, Belarus and European countries.”

She asked International Atomic Energy Agency (IAEA) to urgently send experts and fire extinguishing equipment as soon as possible to prevent “irreparable consequences not only for Ukraine but also for the whole world.”

It isn’t possible to put out the fire now, as this territory isn’t controlled by Ukraine.

Ukrainian officials have claimed that the fires were started in the region by Russian shelling. Dry and windy weather could increase the intensity and scale of the fires in a way that would be difficult to deal with even in peacetime, Denisova said.

“It isn’t possible to put out the fire now, as this territory isn’t controlled by Ukraine,” Ukrainian politician Inna Sovsun said on Twitter.

“We’re afraid the fire will reach the nuclear power plant. The radiation level is already elevated.”

Fires in the Chernobyl Exclusion Zone

The Exclusion Zone around Chernobyl Power Plant was closed off after the reactor meltdown in 1986. This abandoned area is still considered dangerous as the soil contains radiation from the time of the major disaster.

The site itself also still contains nuclear storage facilities and waste dumps that could cause a disaster if set alight, authorities have warned.

Russian troops took Chernboyl four weeks ago. The IAEA has been pleading for an international agreement to allow experts and equipment into the area to ensure the safety of the plant. There have been concerns about shortages of food and fuel for people left in the area as well as the welfare of staff trapped at the power station.

But the local Ukrainian regulator in charge of the area has said that it does not expect the wildfires burning near Chernobyl to cause any radiological concern, according to the IAEA.

Despite radiation measurements currently not being carried out, “the regulator still assessed the radiological risks as low based on years of experience of such fires and detailed data on the locations and amounts of residual radioactive contamination in the soil following the 1986 accident.”

Ukraine’s regulatory authority has said it was closely monitoring the situation in the Exclusion Zone, using radiation detectors outside the area. They are on high alert ahead of the annual “fire season” where spontaneous fires often occur in the region.