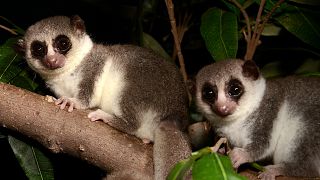 Fat-tailed dwarf lemurs, the only primate known to hibernate, are waking up after entering this state for the first time in captivity.

This year, the fat-tailed dwarf lemur has gone into true hibernation at the Duke Lemur Center in North Carolina, US - and the findings could be important for humans too.

Hibernation is a fundamental part of many species’ lives, but it rarely happens when animals aren’t in the wild.

Normally, captive dwarf lemurs are fed extra over the summer period to help them bulk out, as they normally would in the wild, to allow them to go into a suspended state of torpor (low heart-rate and body temperature).

Unlike in the wild, however, the animals rarely stay in this condition for longer than 24 hours.

In 2021 the team at Duke Lemur Center decided to up the ante and see if it was possible for their fat-tailed dwarf lemurs to enter hibernation in captivity.

Led by Marina Blanco, the staff constructed tree hollows and adjusted the lighting and temperature gradually to match the seasonal changes typical to Madagascar, where the species originates.

If the animals were awake, they were offered food, but otherwise they were left alone.

“They did not disappoint,” says Blanco, “our dwarf lemurs hibernated just like their wild kin do in western Madagascar.

“Hibernation is literally in their DNA.”

During the hibernation period, fat-tailed dwarf lemurs live up to their names - and survive off the fat stored in their tails.

Now the lemurs are starting to wake up, after four months in mostly “metabolic slow-motion”, thanks to seasonal changes in North Carolina. The animals are between 22 to 35 per cent lighter than they were at the start of the process, but are otherwise in good health.

How could research into lemur hibernation be useful for humans?

These squirrel-sized creatures are humans’ closest living relatives, when it comes to experiencing the hibernation process.

Now that we know hibernation can be achieved in captivity, researchers believe that we can learn a lot from the lemurs - including gaining better insight into metabolic disorders found in humans.

While hibernating mammals can lie still for long periods without impacting their health, when humans lie still our muscles begin to atrophy and blood clots start to form.

Human hibernation could have powerful medical potential, particularly for trauma victims with significant physical injuries. Some scientists think it could be the key to unlocking deep-space travel, making missions to Mars more feasible.

Last year Kelly Drew, a professor at the University of Alaska’s Institute of Arctic Biology told the Atlantic, “it’s very possible that humans could hibernate.”

Why don’t animals hibernate in captivity?

Typically species which would hibernate in the wild tend not to when they live in zoos and sanctuaries. This is because hibernation usually happens during cold periods, as an animal lowers its body temperature, slows its breathing and heart-rate, and enters a period of metabolic depression.

In captivity, however, animals typically live in climate-controlled environments with no food scarcity issues either - meaning seasonal hibernation is unnecessary.

But fat-tailed dwarf lemurs are unique. They are so far the only primate and only tropical mammal known to hibernate. This is especially unusual as they are endemic to Madagascar, where the winter period is still tropical with high temperatures.

The species were first found to hibernate (or aestivate - which is when hibernation takes place during warmer temperatures) in 2004, after researchers at the Philipps University of Marburg in Germany published their findings in Nature.

Fat-tailed dwarf lemurs were observed hibernating in tree holes for seven months of the year, despite temperatures of over 30°C. Kathrin Dausmann, lead author on the 2004 paper, found that the success of the hibernation state depended on how well insulated the animal’s tree hole was.

Ultra-rare rhino birth is caught on camera at Chester Zoo