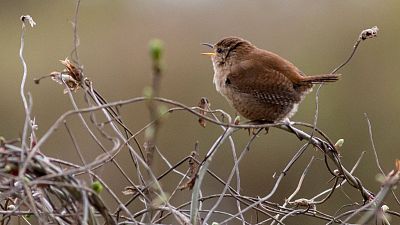 During the first lockdown, noise pollution in cities around the world dropped significantly. It meant the soundscapes of our urban environments changed dramatically almost overnight.

One study in the US using smartwatches to record the sounds of daily life, measured an overall reduction in noise exposure of nearly 3 decibels. It might not seem like much but in real terms that is almost half the amount of sound energy bouncing around our cities and towns.

In July of last year, seismologists also found that they could actually measure how much the “rumble” of human activity had dropped. Through the first months of the pandemic, vibrations recorded by sensors meant for detecting potential natural disasters had fallen by 50 per cent.

In some ways, it has been a very quiet year.

But for the constant chatter of worries inside our own heads, it has not been so silent. The pandemic, repeated lockdowns, and the threat of unemployment as economies around the world took a turn for the worse have had a devastating effect on mental health. Our collective grief for the year has been palpable.

Amid the endless cycle of stress, I have, however, found one small respite. For once, on my busy London street, the quiet of lockdown meant I could hear the birds sing.

At least for a few months, the sounds of nature moved in to replace the constant drone of humanity - and it may have been just what we needed.

Listen to the comforting sounds of nature

It’s not just me that has appreciated these sounds through the relative quiet of lockdown either. When I reached out through a completely different kind of tweet, many others said they felt the same.

Pippa Best runs a business that helps people connect with nature through mindfulness. She says birdsong was a source of calm for her while working from her Cornish seaside home.

“The magic of the sun rising, and the birds singing, in what feels like celebration, is guaranteed to make me feel more at peace, more connected to nature and hope, putting everything else into perspective.”

With less pressure to be somewhere first thing in the morning, many including myself, have woken up to catch the dawn chorus.

“The bird song in the morning and evening always grounds me, I love getting up early to hear it and sit outside with a drink in the evening listening to them,” Shropshire business owner, Barbara Steadman told me.

"In the mornings the bird song now wakes me and I leave the window open in the bedroom so it does. I love the noise and think it is so relaxing.”

The sounds of nature have kept me sane over the past 12 months.

Even in the rural area where she lives, the drop in noise levels was noticeable, “I have definitely been able to hear more birds and other sounds of animals.

“Bird song has become much louder and more varied. The variety of birds I have seen and heard has been more varied than ever before.”

Their song, she says, has helped to keep her grounded while running her online shopping directory business and homeschooling her children during the pandemic.

“The sounds of nature have kept me sane over the past 12 months.”

Have we heard more birdsong during lockdown?

Throughout history, natural sounds have provoked symbolic and emotive responses from humankind. Like millennia of people before me, the ability to hear the birds singing outside my window as the sun rises has been a source of comfort and calm.

The songs of quintessential UK birds - and some not so native introductions - have been my constant companions. I’ve noticed more species than ever from the recognisable tune of the Robin to the tee-yee of the Goldfinch. I even downloaded an app that uses a neural network to recognise bird song and tell you what species you are listening to.

Since well before Charles Darwin mused on the possibility that birds were moved by emotion (singing, he suggested, from “mere happiness”), we’ve linked the calls of these winged creatures to our own emotions.

So much so that 63 per cent of people in the UK said that watching and listening to birdsong had added to their enjoyment of life during the pandemic.

According to a survey from the UK charity RSPB, more than half said lockdown had made them more aware of the nature around them.

“Lockdowns have brought few benefits, but the last year has either started or reignited a love of nature for many people,” says Beccy Speight, the RSPB’s Chief Executive.

“Nature is soul-food to us humans. The results of this survey indicate we may emerge from this pandemic a new generation of nature lovers.”

The importance of protecting biodiversity

There’s science to back these feelings up too. A study released late last year found that the natural sounds we hear when outdoors can have a marked effect on our sense of wellbeing.

Researchers at the University of California Polytechnic hid speakers along a hiking trail and played birdsong to people walking there. Hikers who heard the birdsong reported a greater sense of wellbeing than those who didn’t.

“I’m still kind of flabbergasted that only 7-10 minutes of exposure to these sounds improved people’s well-being,” says Professor Clinton Francis, who oversaw the research.

“It really underscores how important hearing is to us and probably to other animals.”

Perhaps the most interesting response was that the more species the hikers thought they heard, the better they felt. The perception of biodiversity had an impact on how good the natural sounds made them feel.

For the researchers, it highlighted the importance of preventing noise pollution from drowning out these sounds. It was clear that natural soundscapes needed to be improved and protected to help us and the natural world to thrive together.