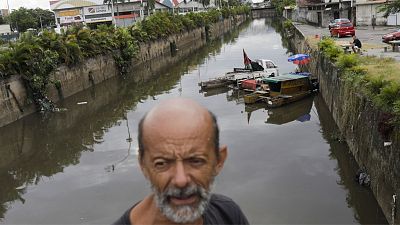 Luiz Bispo, who is living at Pavuna River which flows to Guanabara Bay, stands near his floating house what he says is an artistic installation developed by him.   -   Copyright  REUTERS/Ricardo Moraes   -
By Doloresz Katanich  with Reuters   •  Updated: 29/03/2022

Raw sewage and garbage have taken over the water of the Pavuna River that Barreto calls home.

Passersby look in awe as they spot the houseboat the artist assembled from scrap wood, plastic, and metal he found in the river. Known locally as “Luiz Bispo,” the 55-year-old, who considers himself an artist and philosopher, even has his own small circular swimming pool and van on board.

He uses a plastic container to scoop up the dirty water, filtering out plastic and trash, then lets it trickle back into the river.

"If there's a product on the planet that's really valuable, it is neither diamonds nor gold," he says, sitting on an old sports car seat he attached to the raft.

"Water has always been valuable, and always will be. Without water, there's no life."

Barreto grew up in one of Rio's many impoverished neighbourhoods, known as favelas. He wishes global environmental activists like Greta Thunberg would come to see the issues in Rio, particularly the polluted Guanabara Bay that surrounds the city.

Brazil's waters are choked with plastic

Biologists in Rio de Janeiro studying the presence of microplastics in coastal marine life have found that the impact of plastic pollution is far worse than they had feared.

Even sea urchins extracted from what was thought to be a clean area surrounding Cagarras Islands have traces of plastic inside them.

“Our impact is now on a microscopic level in the ocean, "says Ricardo Gomes from the Urban Sea Institute.

"Sometimes that microscopic impact has more harmful consequences than macroplastics that we can see and even pick up.”

According to the Brazilian Association of Public Cleaning and Special Waste Companies (Abrelpe), more than 2 million tonnes of urban solid waste end up in rivers and seas every year in Brazil.

Watch the video above to see Barreto's unique floating home.