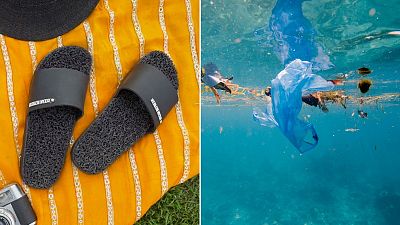 A startup in Brazil is producing footwear made entirely from plastic waste in the ocean.

Even when the COVID-19 pandemic hit the country hard, the sprouting company kept working towards their goal of collecting 2 million plastic bottles by 2022.

Bernardo Pedroso is the founder and CEO of Ocean Refresh. Growing up in Brazil, his mother was one of the country's first surfers, so he practically spent all his time on the beach.

That beach today is littered all over with plastic.

His company is working hand in hand with NGOs such as Route Brazil, organising beach cleanups. And volunteers are mainly from poor neighbourhoods.

"We work with communities, favelas and shantytowns and they go out twice a week and collect general waste from the beaches."

Flip flops make up a large part of plastic pollution which is choking oceans and marine life. Billions of the shoes are made annually, as one of the cheapest alternatives to footwear for many poor communities around the world. Discarded flip flops then end up in the ocean and on beaches. In East Africa, there are approximately 90 tonnes discarded each year, according to Ocean Sole, a conservation group and recycling collective.

Billions of the shoes are made annually, as one of the cheapest alternatives to footwear for many poor communities around the world.

Ocean Refresh claims that every pair of their flip-flops is made from up to 1kg of ocean plastic waste, including up to 24 single-use bottles. Using organic materials also makes the footwear entirely recyclable, so they have launched a so-called '360º programme' for customers where they can send back unwanted pairs to turn them into new ones.

Ocean Refresh had a rough start and during the pandemic had to relocate its production after Brazil went into full lockdown. Today, they still struggle to make the production entirely sustainable, but they are improving every day.

Th team also want to create an ocean charity and do beach cleanups on this side of the Atlantic ocean. By 2023, they aim to educate future generations in over 25 countries around the world.