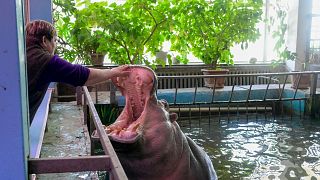 The Mykolaiv Zoo's 4,000 wild animals are trapped by the war in Ukraine. As air raid sirens wail across the southern city, a leopard brushes nervously against the bars of his cage.

It is difficult to tell whether the Amur leopard is rattled by the piercing sound or by the unusual sight of strangers, more than three weeks after the zoo was closed to visitors, says zoologist Viktor Dyakonov.

Literally 600 meters from the zoo, there were shots, battles, broken house stands. And of course, our animals were very nervous.

The first rocket that landed on the zoo, on 27 February, tore up the walkway between the tiger and polar bear enclosures and is now on display in the museum of the zoo, which was founded more than 120 years ago.

Thankfully, no staff or animals were wounded in the attack.

But the episode was very stressful, with a tank battle 600 metres from the zoo, says the museum's director Volodymyr Topchyi.

Since then, three more rockets have landed in the zoo, including one in an aviary. The other two hit near the zoo's administrative offices. And there could be more coming. Fighting is ongoing as the city holds a key river crossing, which Russian troops need to capture in order to push towards Ukraine's top Black Sea port of Odessa.

Evacuation is not possible

There are 400 species present in the zoo and nearly half of them are on the international red list of threatened species, says the zoo's director.

But their evacuation is not feasible. "There aren't enough vehicles to transport the animals and the only road towards Odessa is clogged with traffic," says Topchyi.

"And it's still very cold. If we take the giraffes, the elephants and the hippopotamuses, there's a risk they won't survive," he adds.

Topchyi ruled out abandoning the animals and praised the heroic work of about 100 staff members who continue to take care of their charges, even sleeping at the zoo to reduce the number of dangerous trips across the city.

Even though the zoo is closed to visitors, the public has continued to buy tickets, with people posting their support for the zoo on Facebook.

Watch the video above to see how the animals cope with the situation.