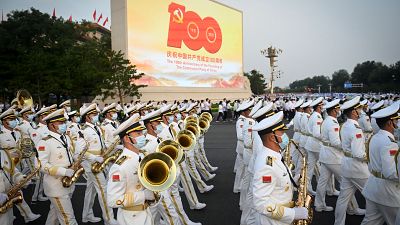 A Chinese military band arrives for celebrations in Beijing in July.   -   Copyright  WANG ZHAO/AFP or licensors
By Maeve Campbell  •  Updated: 09/12/2021

China artificially modified the weather in advance of a political celebration last July, a study by Tsinghua University reveals.

The Chinese government used ‘cloud seeding’ to control rain and reduce pollution in Beijing, in preparation for its Communist Party centenary event. Gathering under unusually clear skies, tens of thousands of people attended the ceremony in Tiananmen Square.

Reports by the South China Morning Post confirm that the operation succeeded and the city saw a drop in air pollution.

There was a reduction in the level of PM2.5 air pollutants by more than two-thirds - and this shifted the air quality index reading from “moderate” to “good”, under WHO standards.

What is cloud seeding?

Cloud seeding is a type of weather modification that aims to change the amount or type of precipitation that falls from clouds. It does this by dispersing chemicals into the air which serve as cloud condensation.

When you introduce these substances into the clouds, the water droplets cluster together, increasing the likelihood of rainfall - meaning clouds clear from the sky.

Weather manipulation of this type is also known as “blue-skying”.

In this instance, the cloud-seeding operation in Beijing was extensive - taking two hours overall. The study said rockets were carrying silver iodine into the sky to stimulate the rainfall.

Although the city experiences warm temperatures in July (averaging between 22 - 31 C), it is also a month with nearly “constant cloud cover”. So cloud seeding is a common procedure for clearing the skies in China - with the government having spent billions of euros on efforts to manipulate the weather over the last 13 years, ever since the 2008 Olympic Games.

Is cloud seeding bad for the environment?

Cloud seeding is not always for aesthetic “blue sky” purposes, there are also claims that it can mitigate the effects of global warming by directly cooling the planet down.

The process does not change the CO2 concentrations in the atmosphere, but it does treat a symptom - heat. So seeding “would have to be performed continuously for hundreds of years until the climate system rebalanced itself,” according to Energy reporter James Conca in Forbes.

It can be a good thing to artificially stimulate rainfall as some places need more rain than others, but are suffering from drought, such as in the US.

However, cloud seeding requires the use of chemicals, some of which are potentially harmful to the natural environment, meaning plants which depend on the contaminated rain to produce food are affected.

Also, if it is not well regulated, cloud seeding can have some extreme consequences. For example, when dry areas are not well-positioned to handle certain weather conditions, they may experience flooding.

Cloud seeding can have some extreme consequences. When dry areas are not well-positioned to handle certain weather conditions, they may experience flooding.

In China, there have been some concerns that large-scale cloud seeding projects could significantly disrupt weather patterns elsewhere in the region. But Xu Xiaofeng, a former deputy director at the China Meteorological Administration, argues that Beijing is aware of the risks and the limitations of weather modification technology.

“Weather modification is not only a scientific problem but also a social engineering project closely related to [a country’s] interests, environment and responsibilities,” Xu wrote in an October paper published in Chinese journal Advances in Meteorological Science and Technology.

However, the operation did cause inconvenience to nearby residents who were affected by the noise.

Those living in the mountains to the southwest of the city say they saw a large number of rockets sent into the sky on 30 June.

“It was very loud, like thunder – and it went on for a very, very long time … it was like a war zone,” one resident told the South China Morning Post. “Then the rain came down, it was quite heavy.”

Another man said he found debris from the rockets outside his home, according to the same report.

So far, there has been no definitive study into the effects of silver iodine on the environment, but the scientific consensus is that, at low concentrations, it is not known to be harmful to humans or wildlife.