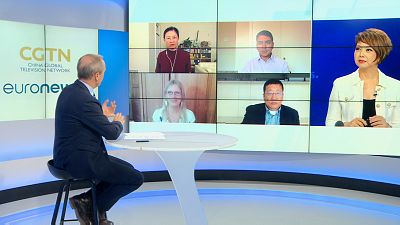 As the COP26 summit gets underway in Glasgow, Euronews and Chinese broadcaster CGTN brought together experts from Europe and China in a unique co-hosted debate programme to discuss the path towards carbon neutrality.

We know that greenhouse gas emissions have to be drastically reduced worldwide, and the entire planet needs to work together to meet the goals of the Paris climate agreement. The thorny question, however, is how to define and then follow the roadmap towards those objectives.

Firstly, why carbon neutrality? Is that the only acceptable goal? The answer is yes, according to Diana Ürge-Vorsatz, Professor Of Environmental Sciences at the Central European University in Vienna.

"I'm afraid we do have to set a carbon neutrality goal, and that's non-negotiable. Stabilising the climate at any level requires us to go to net zero carbon dioxide emissions. In the long term, if humanity wants to survive, we have to give up using fossil fuels," she stresses to our panel.

Many developed countries have a goal of reaching carbon neutrality by 2050. However, China has set its sights on doing the same by 2060. "Why?", asks CGTN anchor Wei Tian.

"Well, I think China is taking a very practical and also methodical approach to this because China is the largest developing country in the world. Actually, if you run the math, you will find that that 2060 commitment itself is bold already," responds Jianyu Zhang, Executive Director of the BRI Green Development Institute.

China's growth, like many other countries, has been fuelled to a great extent by coal, widely considered to be the dirtiest of fossil fuels.

"How do you fix the coal problem? Because coal is just so much last century's technology, but it's what's powering all of this growth and development. How are you going to clean it up?" asks Euronews science correspondent Jeremy Wilks.

Changhua Wu, the China/Asia Director at The Office of Jeremy Rifkin says the phase-out will happen: "So coal, of course, unfortunately, we have to address as soon as possible, and that's already in the plan. But more importantly, actually, China is literally redesigning its national energy system."

Dr Zhang also intervened on this issue, saying: "It's not just the use of the coal. We need to look at the issue in its entirety because this is the global climate crisis that we're trying to resolve."

Switching to renewables does have its challenges. At the moment renewables are at around 20% market share in Europe. Moving forward, we need to see renewables at 70%, 80% or even higher. In that context, how should we manage our energy consumption when the sun is not shining and the wind is not blowing?

Ajay Gambhir, Senior Research Fellow at the Grantham Institute For Climate Change And The Environment at Imperial College London gives the panel an example of how this energy revolution will look in practice.

"We'll be plugging our cars into the charge in a few years' time, and the batteries in those cars will be feeding electricity back to the grid. There are already a number of electricity companies that are piloting those vehicles-to-grid technologies. So our cars will be contributing as sort of mini power stations to the grid and providing storage in that way," he says.

Professor Ürge-Vorsatz says we also need to focus on the built environment and the efficiencies that can be easily gained.

"Today we know, for example, how to build and retrofit buildings in a way that they are basically power plants, so they produce more energy than what they and their inhabitants all consume. So we can cut energy consumption by nine-tenths, by 90 percent, simply by innovation and not by expensive high technologies," she says.

Achieving carbon neutrality is a big challenge that will involve significant shifts in how we power our world. However, if we are to slow the warming of our planet at any point in the future whatsoever it's a target that simply has to be achieved.

Ending deforestation by 2030: Landmark deal or rerun of past failures?