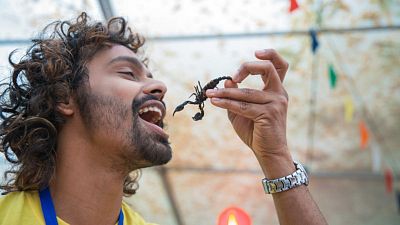 This might sound like a strange question, but for Dr Indroneel Chatterjee, orthopterans are just one of many insects he is accustomed to having for lunch.

“If you dry roast them and add some teriyaki, they really are quite tasty.”

A consumer psychologist by trade, the lecturer at Oxford Brookes University is investigating ways to encourage people to include more insects in their diet.

“I can look at a large insect and eat it quite happily, regardless of how visually disgusting it may look.”

The practice, known as Entomophagy, is followed by over 2 billion people around the world.

According to Chatterjee, insects are not only a great way to add flavour to a meal or snack. They are better for the environment too.

“[Animal] protein is one of the most unsustainable sources of nutrition to produce, because of the greenhouse gas emissions, the amount of deforestation and the use of energy involved in the rearing of livestock.”

It takes 20 kilograms of feed to produce one kilo of protein from a cow. But with insects, it only takes 1.7 kilograms. Cold-blooded animals also require less water and boast a faster reproduction cycle than conventional livestock.

“The reproduction rate of crickets is merely six weeks. For a cow, the whole cycle is about six years.”

Better yet, insects offer an abundance of naturally-occurring nutrients which rival that of their animal counterparts.

Crickets contain more protein than beef per gram, mealworms are richer in Omega 3 than salmon, and house flies have more Vitamin B2 than milk.

So what are the best ways to eat insects?

With bugs increasingly being touted as an environmentally friendly food source, getting over ‘consumer disgust’ is likely to be the biggest challenge.

For Dr Chatterjee, the answer is simple.

“It's very easy to replace 25 per cent of the flour used in a baked item with insect flour,” he explains.

“Cricket flour is one of my favourite things to compliment with things like chocolate, because a lot of people say it smells of popcorn and tastes quite nutty.”

And if sweet bakes aren’t your thing, you can experiment with some of Dr Chatterjee’s favourite savoury dishes instead.