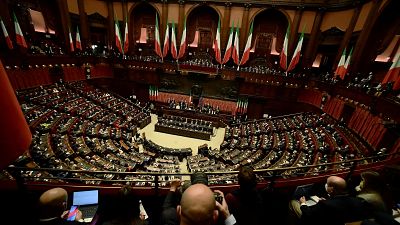 A general view of the parliament during the Italian President Sergio Mattarella's swearing-in ceremony at the Montecitorio Palace in Rome, Italy.   -   Copyright  Filippo Monteforte/Pool via REUTERS
By Rosie Frost  •  Updated: 09/02/2022

In a historic vote, Italy has made protecting the environment part of its constitution.

On Tuesday, the Italian parliament approved a law that means the state must safeguard ecosystems and biodiversity “in the interest of future generations.”

The changes to the constitution also mean that health and the environment must be protected by the economy. The new law states that private industry can no longer impact the climate. The protection of animals has been recognised too.

The inclusion of the environment and animals in the Italian constitution has been hailed as significant for the country’s future by both politicians and activists.

“I think it is an epochal day,” Minister of Ecological Transition, Roberto Cingolani said in a statement.

“It is right that the protection of the environment, biodiversity and ecosystems become a founding value of our Republic, it is an essential step for a country like Italy which is facing its own ecological transition.”

He adds that the achievement allows Italy to have “well-defined rules” for protecting the planet - especially as today’s actions will have consequences on future generations.

Virginijus Sinkevičius, European commissioner for the environment also called it a “major step” on Twitter.

She goes on to say that the constitutional amendment is an “important first step” to harmonising Italy’s legal system with environmental principles developed at a European and international level.