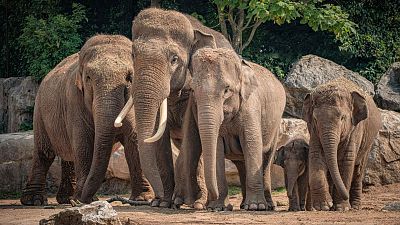 Scientists are trialling a vaccine to fight a deadly virus threatening the survival of endangered Asian elephants worldwide.

Elephant endotheliotropic herpesvirus (EEHV) is a major threat to the long term survival of the Asian elephant. It is a type of herpes virus that is often fatal for young Asian elephants with a mortality rate of up to 80 per cent. Once symptoms start to show it is often too late to treat it.

Since EEHV was discovered at The National Zoo in Washington DC in the US in the 1990s it has become a nightmare for elephants bred in captivity.

Worryingly it is now being seen in wild herds too. Just 40,000 Asian elephants remain in the wild and reports of fatalities due to the virus are on the rise in India, Nepal, Myanmar and Thailand.

The vaccine being developed by Chester Zoo and the University of Surrey in the UK is the first of its kind to have entered a pilot study with elephants anywhere in the world.

“This is an important moment in our research. Now that we have entered a pilot study stage there is real optimism we can find a safe vaccine that works,” says Dr Falko Steinbach, professor of veterinary immunology at the University of Surrey.

A safe and effective vaccine

Elephants at Chester Zoo have become the first to receive this trial vaccine. It is only possible because keepers are able to get close enough to them to monitor their health and take blood samples.

Co-operation from the animals has already allowed them to detect EEHV before symptoms show. In 2019, it meant that the team could save now five-year-old calf Indali from the deadly virus.

Lead researcher Dr Tanja Maehr says that the initial results from the pilot study are encouraging with the vaccine appearing to stimulate an immune response.

The global conservation community is today a step closer to finding a viable vaccine to save Asian elephants from this deadly disease.

“However, it’s not yet enough to prove the vaccine will prevent young elephants from dying of EEHV. It’ll be several months until the first stage of our work to select the best candidate vaccine and determine optimal dosages and frequencies is complete,” Maehr explains.

“Finding a safe and effective vaccine that works for Asian elephants globally is the best way to tackle this devastating disease,” says Mike Jordan, Director of Animals and Plants at Chester Zoo.

He adds that the pilot study is a “light at the end of the tunnel” as the only long term solution to EEHV is finding a vaccine.

“The global conservation community is today a step closer to finding a viable vaccine to save Asian elephants from this deadly disease.”