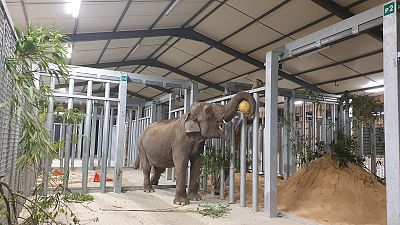 The 1,300 inhabitants of Bussière-Galant, France, recently got an a new and unusual neighbour - a four-legged elephant called Gandhi. The 52-year-old female Asian elephant is the first resident of a unique sanctuary for circus and zoo elephants.

Two former Flemish zookeepers, Sofie Goetghebeur and Tony Verhulst, created the sanctuary in response to a ban on employing wild animals in circuses. The ban is currently in place in 23 European countries and will soon be adopted in France.

The zookeepers believe there are around 100 elephants currently in circuses across Europe. Shipping them back to Asia or Africa is often complicated and can be dangerous for the animals, so it is better to find them a local sanctuary.

Set in the heart of the Périgord-Limousin natural park in Bussière-Galant, Sofie and Tony started building the so-called 'Elephant Haven' on an old 29-hectare farm back in 2016. Mayor Emmanuel Dexet was at first "a little surprised" but "happy" with the idea of creating the sanctuary.

For the past five years, the couple have been working with local authorities to produce safety measures, which will be brought into effect should the elephants escape into the vast forests that surround the sanctuary.

Gandhi is thought to be from Thailand and was born in the wild. She was transported to the park of Givskud, Denmark in 1973 and entrusted to the former zoo of Pont-Scorff (currently Les Terres de Nataé) in 1998.

"Gandhi is thought to have experienced some traumatic events in the past, in particular difficult relationships with her own kind," say the team of Elephant Haven in their newsletter.

As elephants are social creatures, she will be slowly re-introduced to other elephants in the calm environment of the sanctuary.

She was transferred to the refuge on 14 October, after months of preparation.

"Three months ago, we started taking care of Gandhi at the zoo (now Les Terres de la Nataé) with the aim of demonstrating that she could be successfully prepared for transportation to EHEES (Elephant Haven European Elephant Sanctuary), for a peaceful retirement, " say the team.

Ghandi's journey by transport vehicle took 10 hours and there were no complications.

"On arrival, she left her crate quickly and confidently, straight into our warm elephant barn and began eating straight away."

After a few weeks, she is still adapting to her new environment. The cool winds of the surrounding valleys - which sit at an altitude of 400 metres - often convince her to return to her brand new enclosure, constantly heated to 18°C by two heat pumps and a stove.

The sanctuary is authorised to house three female elephants in its current state, but there are plans to expand it. The couple ultimately intends to collect six or seven elephants and help them live the remainder of their lives in peace.

"We hope they will stay here for another 20 years," says Sofie, and there is a chance.

An elephant can live up to 70 years, at least in the wild, according to the French Association of Zoological Parks (AFdPZ).

Watch the video above to see Gandhi in her new home.