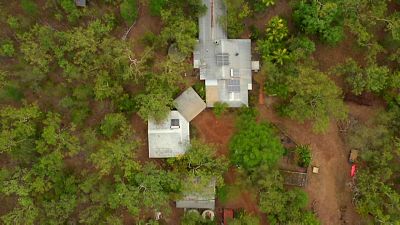 As the climate crisis progresses, many people are looking at ways they can reduce their carbon footprints: from swapping out meat in their diets, to installing energy-saving light bulbs in their homes.

But for this innovative couple, their fight against the climate crisis began over 40 years ago.

Tucked away in Australia’s sun-beaten Northern Territory, Pam and Peter Garton live in a village that’s been off grid since the 1970s.

And while the rest of the world may have been slow to realise the potential of solar energy, they have been powering their homes with the sun’s rays this entire time.

"We've got a very comfortable system now, but in the early days there was certainly me down there in my sarong starting the generator," admits Pam, who says it took a lot of time and effort to get the project off the ground.

Both residents and non-residents donated their time and money to help, including building solar energy systems with bits and pieces found in the area.

"We had a private subdivision and each person bought shares and had their own block," says Peter.

Today, there are 13 individually owned blocks situated in the rural region of Humpty Doo, near Darwin.

And despite being off grid, residents insist they still have all the comforts of home.

"It's a very comfortable house to live in. The rammed earth walls, they're 30 centimetres thick so they maintain temperature fairly consistently," says Pam.

Born from the ashes

The village was built in the aftermath of Cyclone Tracy - a deadly tropical storm which killed 71 people and destroyed more than 70 per cent of Darwin's buildings in 1974.

"The whole of the Top End of the Northern Territory, the infrastructure was destroyed,” recalls Peter Garton.

“There were all sorts of open questions about how Darwin should be rebuilt. And we thought we could contribute to that decision.”

Despite initial interest from the Australian government, residents eventually financed the construction of the solar village themselves - using infrastructure plans drawn up by students at Queensland University.

40 years later, the village inhabitants see the project as a success.

"It's great we've got all this area, the kids run around and enjoy themselves," says resident Liam Golding.

"It's a great snapshot of what can be done when people get together in the spirit of community science and make something happen."

Watch the video above to see the solar village for yourself.