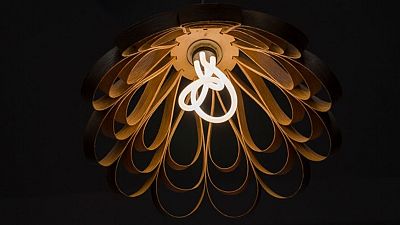 In the beginning there was light — light bulb, to be precise. The origin story of award-winning design company Plumen and its energy-saving 001 bulb dates back to 2007.

That year, global warming became enmeshed in the cultural zeitgeist. The Nobel Peace Prize was jointly awarded to the Intergovernmental Panel on Climate Change and former US Vice President Al Gore, whose documentary An Inconvenient Truth and others like the 11th Hour helped make environmentalism a kitchen table topic.

Meanwhile, in London, Nicolas Roope — a fine arts graduate and digital entrepreneur — was following through on his own bright idea for how to usher a sustainable lighting revolution into the mainstream marketplace. In his words: “create a cool, coveted product.”

He and business partner Michael-George Hemus and their collaborator Samuel Wilkinson, got busy developing a game-changing concept: ‘The world’s first designer low-energy light bulb’ — a symbol of ideation as beautiful as it was good for the planet.

Launched in 2010, the Plumen 001 was the physical embodiment of Roope’s vision of cross-pollinating disciplines: creativity, art, design and technology.

A pristine exposed interlaced tubular aesthetic emerged out of the necessary tech specifications for the compact fluorescent light (CFL) — which was then state-of-the-art, using 80 percent less energy than its incandescent predecessor.

What’s past is prologue, and over a decade later in 2018, the bulb that illumined the path for a once-fledgeling industry is ready for its upgrade and rebirth.

The new 001 LED boasts a lifetime of nearly 20 years of average use, improved quality of light and colour rendering, and dimmability. Yet it has retained its iconic look, albeit pared down to a more petite and sleek size.

“The original 001 was a bi-product of the nature of CFL technology, shaping those tubes, but actually there were a lot of real benefits to that construction,” says Roope. Among them: the way light spreads out across the entire bulb surface. “It’s a classic in its own way,” adds the Plumen creative director, who also shares a co-founder title with Hemus (the firm’s strategic director).

Both the original and 2018 reboot are unmistakably sculptural. This is perhaps no accident as Roope studied sculpture. He found inspiration in renowned creators like the late Dan Flavin — whose neon works he describes as “magical pieces of art, which at the same time feel like designs.”

He also has something unusual in common with Flavin. Both men have pieces in the permanent museum collections of MOMA and Cooper Hewitt in New York. In addition to those institutions, the 001 has been immortalised in London’s Victoria & Albert.

But hardly preserved in aspic. “We’re trying to create timeless designs, which can be modernised and reinvented,” explains Roope.

Past and Future Perfect

Plumen doesn’t however shy away from nostalgic sensibilities. Through a twist of fate, and glass, the original 001 found itself inadvertently in sync with the decorating trend related to the antique filament bulb, of which he says “Edison had the most romantic vision”.

Roope dissects this inefficient retro lighting craze, amid an era of dire environmental stakes: “These bulbs that we ignored but sort of loved in the background were being replaced with something unpleasant [CFLs].” As a result, the glamorous old Edison incandescents started cropping up at trendy restaurants and hotels everywhere. “It was a swan song — a last dance with this technology,” he notes.

The 001’s dynamic squiggle feels, in some ways, like an energy-efficient descendent of the Edison, for Generation Green. “We were trying to say, there’s romance in new technology.. something to be fallen in love with – it just needs to be approached in a different way,” says Roope.

They also achieved this with the Plumen 003 — a hybrid of a spotlight and omnidirectional candle glow, which evokes a bygone majesty in a newer LED. Together with artist Claire Norcross and jeweller Marie-Laure Giroux, they fashioned a lamp with a geometrically-patterned brass nexus, complete with Art Deco echoes.

Even so, Plumen keeps zooming forward, apace with cutting-edge technology, in its products — bulbs, chandeliers, shades and other related accessories. The team collaborated with Milan design studio Formaliz3d on Kayan 3D-printed lamp shades for the 001— available in biodegradable and recycled materials.

Roope discovered Formaliz3d and their woven lamp accoutrements when he was browsing Pinterest — a digital space he’s fond of exploring. “I love it for ideas and inspiration,” he says, brimming with enthusiasm for the next big and beautiful innovation, “I’ve got five years of product releases in my head.”

In the meantime, Roope can afford to sit back in satisfaction — knowing that Plumen has lit a way forward in a time of environmental darkness.

He concludes: “I hope we inspired the world to see the light bulb in a different way and changed lighting by creating that spark that helped people realise that new efficient technology wasn’t a compromise, but something to be thrilled and excited about.”