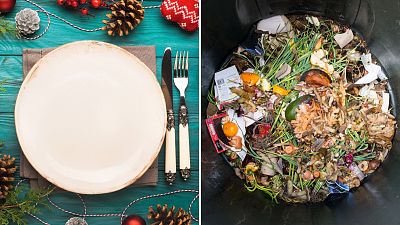 Christmas may not be celebrated in the usual fashion this year (again), but families across Europe will still sit down and have a meal together in an attempt to spread some cheer.

While the festive period is a happy time, it brings other problems with it too - and food waste is a big one.

In Europe alone around 88 million tonnes of food waste is produced every year. And in the EU, it is households which are responsible for more than half of the total food waste.

So how do we ensure we’re cutting down on waste during a celebration so often associated with huge quantities of food?

Pierre Condamine is the waste policy officer at Zero Waste Europe. According to him, the best approach to avoid throwing away your grub is to change your mindset from the start.

The best approach to avoid throwing away your grub is to change your mindset from the start.

“The first tip is to cook with a preventative approach,” he says. This includes calculating exactly how much food will be needed, and adapting any recipes accordingly.

With 2021 being such a strange year, Condamine says this is an excellent time for solidarity. You could search for food sharing platforms online, or give any leftover food to neighbours or someone in need.

“It’s not just about individual things, this is also about what you can do to the community,” he says.

In Europe food waste varies from country to country. In some countries wastage happens on a consumer level while in others it is greater on a production level.

In Portugal for example, only 17 per cent of food is left over, whereas in the EU overall it is 20 per cent.

Condamine says part of the reason for the differences between countries is legislations in each nation. Some countries such as France have made it compulsory for supermarkets to give away food instead of throwing it away.

The European Green New Deal aims to reduce food waste by fifty per cent by 2030.

Food waste is not just an issue during the Christmas period. Even after the chocolate has been scoffed and our bellies are filled with mulled wine, scraps will still be left on plates and emptied into bins across the continent.

Condamine says it is important to look at the bigger picture. “This is like a circular vision of food production, and food waste is embedded in this, but it’s bigger, it’s about the whole sustainable food system.”

“I think the first thing we forget is that it’s about not wasting in the first place.”

What can you do to reduce waste at Christmas?