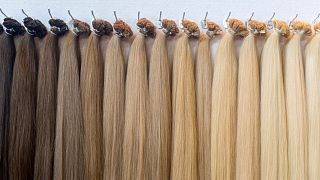 There are so many ways we can make our lives more sustainable. From cutting down on plastic and recycling properly, to reducing our meat intake and walking and cycling more.

But of all of them, this new trend is probably the most unusual. We all know fast fashion is damaging so Amsterdam-based designer Zsofia Kollar wants to flip the textile industry on its head - by making clothes out of human hair.

To do this, she goes around local hair salons to collect her ‘raw materials’.

“Waste hair ends up in landfills, accumulates in large amounts in the solid waste streams, choking the drainage systems.”

Learning all this was reason enough for Kollar to think of a viable solution to the problem - so she founded Human Material Loop.

The benefits of human hair as a material

“Human hair is a globally available material. It is not like cotton or wool that can only be sold in a specific area,” says Kollar. This allows for local production and local labour.

By producing clothing locally, the amount of CO2 polluting the air is reduced as transporting large containers full of fabric won’t be necessary anymore. “Local production allows us to produce only on-demand,” she explains.

Think of the paradox - we waste so much human hair, yet at the same time it is normal for us to wear sheep or alpaca hair in our clothes. Human hair is a keratin protein fibre, just like animal hair, but it's environmentally-friendly, so why aren’t we making use of it?

Kollar explains, “While animal hair needs to be treated with chemicals to remove the blood and the faeces that end up in our water, human hair is pretty much ready to go. It only needs to be steamed.” Unlike animal hair, it is also cruelty-free.

One jumper prototype has been produced so far by Human Loop Material, based on knit designs by designer Li Jiahao, in The Hague.

As the hair was collected in the Netherlands, the prototype is called ‘Dutch Blonde’ and is made of 100 per cent recycled human hair. But the yarn is currently produced at a spinning mill in Italy.

“In the future, I am planning to have all the material produced locally,” says Kollar. Her plan is that collected hair that is too short will be used to spin yarn and then be repurposed as a natural fertiliser, as it provides nitrogen for the plants when it decomposes.

That way, designer Zsofia Kollar is creating a closed-loop system which means no leftovers or waste from the production.

How does the wider fashion industry waste resources?

Global campaign group Fashion Revolution is yet another organisation striving towards a closed-loop system, as it says the industry is environmentally damaging.

“Currently, fashion is based on an extremely exploitative industry within the capitalist system. It exploits our resources, our environment and all the people that work in it,” says Dieuwertje de Wagenaar, country coordinator at Fashion Revolution and project manager of The Circular Fashion Lab of the University Wageningen.

Within the last 15 years, fashion production has doubled worldwide, she tells Euronews Green - and two thirds of that clothing is based on fossil fuel fibres.

“Less than 1 per cent of garments are recycled into new garments - which would be the ultimate loop. The largest part is thrown away, dumped into landfills or is devalued into products that we cannot recycle anymore,” she says.

According to de Wagenaar, this means that a lot of resources are used up in the process of production and then clothes are only worn for a short amount of time.

In the end, most of them are discarded.

Why it’s important to use existing materials

Yophi Ignacia, another country coordinator at Fashion Revolution and founder of The Future Mode advises looking at materials that already exist - just like human hair.

From a designer’s perspective, I think it is important to look at all the different options for material that are out there. We need to ask ourselves, which other kinds of material can we use to diversify this system.” For Ignacia, the idea of Human Material Loop sounds logical, as there is waste that can be turned into new resources without the need of growing it first.

“I think this is a sustainable solution because something is used that otherwise would be thrown out. This is thinking about sustainability circularly.”

Designer Zsofia Kollar is positive that she can make an impact with human hair to make the fashion and textile industry more sustainable in the long run. “In the past, people have used all kinds of materials around them. For example, ropes made of hair were a very common thing. But nowadays, we seem to have forgotten that human hair is also a natural material,” she says.

“So I am trying to help people become more open-minded to different materials again and hopefully in the future, wearing a jumper made of human hair will be normal.”