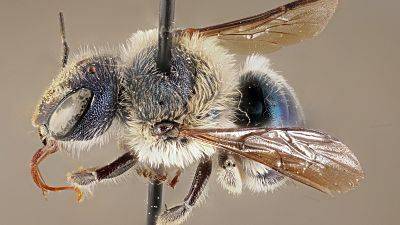 A blue bee has been re-discovered in Florida. The ‘blue calamintha’ bee was last sighted in 2016 but since then appeared to have disappeared completely. Now, the “ultra-rare” species has been spotted again at Central Florida’s Lake Wales Ridge and scientists are keen to find out exactly how many are left.

“I was open to the possibility that we may not find the bee at all so that first moment when we spotted it in the field was really exciting,” says Chase Kimmel, a postdoctoral researcher at Florida Museum of Natural History. Kimmel has been living at the Archbold Biological Station in the area since March, in order to get a first-hand look at how the bee is fighting to survive.

The metallic, navy insect is described as an understudied and imperiled species. But it’s not only notable for its colour, the bee also has “unusual facial hair” with which to pick up pollen. Scientists have observed the particular way this bee bobs its head back and forth when visiting flowers and also notes that it is a solitary species which creates individual nests instead of hives like honeybees.

The bee is thought to live only in the Lake Wales Ridge region. This is a globally recognised biodiversity hotspot and one of the nation’s fastest-disappearing ecosystems, according to a 2015 U.S. Fish and Wildlife Service report. “This is a highly specialized and localized bee,” comments Jaret Daniels, adviser to Chase Kimmel. As a pollinator, the status of the bee depends on another threatened species, a blooming plant known as Ashe’s calamint.

The ridge where the bees are found is right next to American highway, U.S. Route 27. This area is now covered in patches of “pine scrub dotted among the orange groves.” Working on the project, Kimmel says, “puts into perspective how much habitat loss affects all the animals that live in this area.”

Researchers capture the bee in a plastic bag with a hole in order to photograph its head, before releasing it. The pollen left in the bag is then analysed to determine which flowers it visited; this gives scientists an awareness of the bee’s range and an increased understanding of its biology.

It’s not always easy though. “It takes an army to make it happen,” says Kimmel. The researcher’s objective over the next year is to record the bee in as many locations as possible to look at current population status and distribution, as well as its nesting and feeding habits.

“We’re trying to fill in a lot of gaps that were not previously known,” he says. “It shows how little we know about the insect community and how there’s a lot of neat discoveries that can still occur.”

Why do we need bees?

Bees matter because they are our predominant pollinators. Pollinating a third of the food we eat and 80 per cent of flowering plants, they play a crucial part in providing us with stable, healthy food supplies.

“Pollination is crucial because many of our vegetables, fruits and the crops that feed our livestock rely on it to be fertilised, so without it, we could go hungry. Vegetables such as broccoli, asparagus and cucumber rely on the pollination of bees, as do apricots, strawberries, apples, tomatoes and almonds,” says the Woodland Trust.

Kimmel agrees, telling Euronews Living, "Bees are important for our ecosystems because they are very efficient pollinators. Their services lead to seed germination and ultimately to many of the foods that we and wildlife eat. The blue calamintha bee specifically pollinates Ashe’s calamint, a state threatened plant."

Although there are other methods of pollination, such the wind, birds, bats and other insects, wild bees are among the most important because they are capable of operating on a much bigger scale.

But bees are in trouble. Bee decline across the world is caused by a combination of factors, such as loss of habitat due to intensification of farming, exposure to pesticides and the effects of climate change.

“More than ever before, we need to recognise the importance of bees to nature and to our lives,” explains charity Friends of the Earth. Friends of the Earth offer ‘bee saver kits’ to anyone interested in learning more about how to protect the species in their local area.